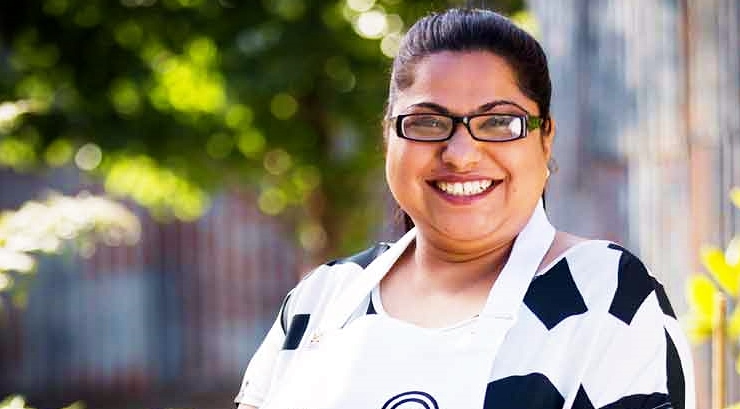 Melbourne, May 20: Undercooked potato and an uncrunchy batter – MasterChef favourite Nidhi Mahajan made an early exit from the reality cooking show.

Nidhi, who moved to Australia some years back along with her husband, was one of the first contestants to make it to the top 24 for season 8.

Not to be undone, Nidhi originally from Chandigarh, Punjab, although surprised with her elimination; will now focus on her new venture – ‘celebrity-chef-at-home’ that envelope her “love for food”.

THE ‘happiest’ on MasterChef Australia, Nidhi, left a lasting impression on the show. Australia fell in love with her simplicity and her traditional Indian cooking.

As she bowed at the judges’ feet as a mark of respect after she was eliminated on Thursday, Matt Preston said, “Oh, Nidhi, we’re gonna miss you.

Although Nidhi’s stir-fried cauliflower with potato bhajis failed to meet the mark, she is upbeat.

“…if you’re working hard, your dreams do come true”.

While on the show Nidhi had impressed British gastronomic guru and MC guest judge Marco Pierre White with her skilful use of spices.

“I just love your cooking. Your use of spice is genius. I wish you had a restaurant where I live, I would be there every week,” White told Mahajan in a video shared on Facebook.

Nidhi hopes to one day cook for him again.

“I’d love to have him over and have food on my dining table or maybe I can go to his London house and cook for him. That’s the dream … I can die peacefully after this,” she laughs.

Nidhi’s father disapproved her dream of becoming a chef.

“When I was 13 years old, I wanted to become a chef. I told my dad and he was like ‘No, chef profession is not for girls in India’,” she said in the Facebook video.

But today it is no-holds barred. Nidhi plans to juggle her call centre work and hopes to get her ‘home-chef’ venture running in Adelaide soon.

“I’ll be taking over other people’s kitchens and cooking at their home whenever they are entertaining friends or having a dinner party,” says Nidhi about the business which will be ready to go in coming weeks.

“We can decide a menu and then I’ll be serving them the way you do in a restaurant, but at home.”

“I want people to be able to sit and talk with their friends and enjoy the food I will be cooking … you can be the guest at your own party. I just want to cook 24/7 — that’s my dream.”

Nidhi and her husband Sumit also plan to make takeaway available to people from their home.