Skip to content
You are here
Home > Sport > Sania, Paes, Bopanna off to a winning start at French Open 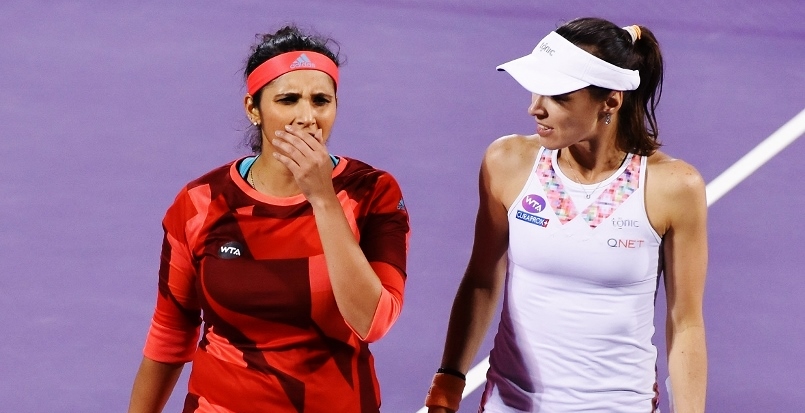 Paris, May 26: India’s tennis stars Sania Mirza, Leander Paes and Rohan Bopanna got their French Open campaign off to a winning start as the trio won their respective women’s doubles and men’s doubles matches to enter the second round here on Wednesday.

World No.1 women’s doubles pair of Sania and her Swiss partner Martina Hingis defeated the Russian pair of Darya Kasatkina and Alexandra Panova 7-6 (4), 6-2 in one hour and 31 minutes.

India’s Paes and his Polish partner Marcin Matkowski defeated Belarusian and Uzbekistani pair of Alexander Bury and Denis Istomin 7-6 (3), 7-6 (6) in one hour 46 minutes.

The top seeds Indo-Swiss pair Sania-Martina began the match on a positive note, taking a vital 5-0 lead over the Russian pair in the first set.

But a couple of unforced errors and losing two successive serves handed Darya-Alexandra the advantage as they staged a remarkable comeback to make it 5-5 in the first set.

From there on it came down to 6-6 and the reigning Wimbledon, US Open, Australian Open champions pair held their nerves to win the tie-breaker 7-4 to grab the first set.

The first set win proved a confidence booster for the top seeds as Sania-Martina, courtesy of a couple of aces and powerful forehand shots, took an important 4-2 lead in the second set.

There was no looking back for them as they went on to win the next two games and the second set 6-2 and enter the second round in style.

On the other hand, the sixth seeded pair Bopanna-Mergea started the first set on a good note, taking a comfortable 5-2 lead over the French pair. From there on it was an easy task for the Indo-Romanian duo to clinch the first set 6-2.

The second set was a replay of the first as Bopanna-Mergea took a 4-1 lead and then grabbed the second set 6-2.

Later on the 16th seeded pair of Paes and Matkowski were on the back foot in the first set standing at 3-5 but came back strongly to level things at 6-6 and then eventually win the tie-breaker 7-3 in a one-sided contest to grab the first set.

In the second set too, despite being 4-3 down, the Indo-Polish pair levelled things once again making it 6-6 and won the tie-breaker yet again by 8-6 to march into the second round.