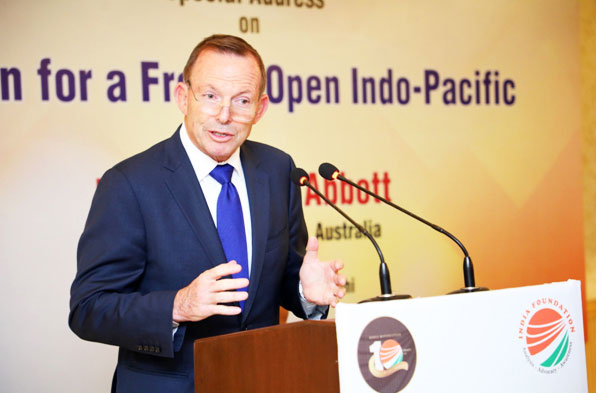 Good news for friends of Indian diaspora down under, Oz India ties – will now be Tony Abbott’s personal mission.

One of the first  Prime Ministers of a country to visit Narendra Modi after his 2014 election win, Tony Abbott was back in India last month to deliver 10th India Foundation Address on  in New Delhi.

India Foundation is an independent research centre focussed on the issues, challenges and opportunities of the Indian polity. Based on the principles of independence, objectivity and academic rigour, the Foundation aims at increasing awareness and advocating its views on issues of both national and international importance.

Seeking to articulate Indian nationalistic perspective on issues, the foundation says it, “can help understand the Indian (civilizational) influence on (our) contemporary society.

Mr Abbott was invited to deliver the address on Vision for a Free & Open Indo-Pacific.

Not less than singing praises of the subcontinent again, Mr Abbot concluded his address by saying, “My instinct is that, 50 years hence, India will be much more prosperous and no less democratic; every bit as strong as China, in fact, but far less overbearing. I hope that Australia will be a key partner in India’s rise. A world with two democratic superpowers, not just one, will be more free, more open, more prosperous and ultimately fairer to everyone – because that’s the way countries are (even superpowers) when they have to take all their citizens seriously.”

The former prime minister said he would make it his “personal mission” as an ex-PM in his post parliamentary life to deepen ties between Australia and India, an area which had been the subject of “benign neglect” by Australia.

Tony Abbott first visited India 38 years ago on his way to England where he was going for further studies having won a scholarship.

“I was tremendously exhilarated at the thought of studying at the world’s oldest English-speaking university and spending time in one of the cradles of Western civilisation – but some instinct said that I shouldn’t travel straight from Australia to England, and fly right over the most significant country on the way; itself a home of civilisation, yet with spiritual links to my own; via much history in common, a shared passion for literature and sport, and a shared commitment to democracy and the rule of law” Mr Abbott told the audience.

And thus he landed in Mumbai and travelled by train and bus to Udaipur, to Delhi, to Kashmir, and then to Bihar, where he spent two months with Australian Jesuits based in Hazaribagh, Daltonganj and Bokaro Steel City, including time as a teacher’s aide in schools and on missions to the Adivasi hill tribes.

“It was a formative time in my life and left me with a lasting appreciation of India’s great strength and vast potential”, Mr Abbott added.

Using provocative language and perhaps much to the chagrin of Chin, Mr Abbott warned that Australia needed to be careful about putting “too many eggs in the China basket”.

“We might be grateful that India will not be the next China, politically,” he said.

“The often glossed-over reality is that it’s hard for Australia to be a meaningful strategic partner to a country that thinks it can bully its neighbours on the basis of confected territorial claims; that it refuses to submit to arbitration, and tries to resolve unilaterally in its favour.

Mr Abbott said it was hard to see relations with China rising much above the level of a “cold peace” any time soon.

Wishing Indian economy well
Wishing India does as well if not better than China economically, Mr Abbott said, “… why would anyone, especially India’s friends, be so sure that India won’t be the next China, economically?

“Why should Australian officials think that what one country of a billion people could achieve under the dictatorship of the proletariat is impossible in another that has the blessings of democracy, the rule of law and the English language?

On Free and Open Indo-Pacific region
It stands to reason, Mr Abbott said a free Indo-Pacific depends on the countries of this region being free and open. Bring India, the United States, Australia and Japan on a single platform of equal footing is the idea Mr Abbott is advocating.

“Obviously, the best way to advance that great goal is to deepen the partnership between the Indo-Pacific’s longest-standing democracies, the countries that are already most free and most open, and have the capacity to help and inspire others: namely India, the world’s largest democracy and one of its most resilient, now with the confidence to match its status; the United States, the greatest defender of democracy, and the country the world still looks-to-first for help in time of trouble; Japan, for decades an exemplary global citizen, since learning the harshest lesson about the alternatives to democracy; and Australia, one of the first to adopt so many of the features of modern democracy, such as universal suffrage and votes for women, and a reliable friend in good times and bad.

“Because the closer the understanding and the deeper the cooperation between the four most significant Indo-Pacific democracies, the more free and more open our region inevitably will be.

“Accompanying the revived “Quad”, there have been more naval exercises involving India, the United States, Japan and Australia; plus Indian naval deployments through the South China Sea under its Look East policy.

A free Indo-Pacific depends on the countries of this region being free and open. The best way to advance that great goal is to deepen the partnership between the Indo-Pacific’s great democracies: India, the United States, Japan, and Australia.

Expressing his deep regret that Adani mine had to face issues before finally it got underway, Mr Abbott did not mince any words that Australian officialdom was still reluctant about India which was not helping Oz India ties.

“Even now, though, Australian officialdom seems unnecessarily cautious about the potential of the Australia-India relationship.”

Particularly in the context of Oz India ties, Mr Abbott said it goes without saying that this should be relatively easy between countries with very similar values, and comparable systems of government and administration, and especially between those that can readily speak each other’s language.

“To put it simply, a partnership between two democracies such as India and Australia should be far easier to build than one between Australia and a one-party communist state like China. Perhaps this is why the relationship between Australian and India, until recently, has largely been taken for granted; while that with China has been carefully cultivated by all governments and assiduously fostered by all prime ministers since Bob Hawke (who at the time of his death had made over 100 trips to China).

Tony Abbott said his government was determined to accelerate Oz India ties and listed the following:

And he did not forget returning of the invaluable antique statues of God Shiva, stolen by a rogue art dealer.

He hoped the work he began with Prime Minister Modi on Free Trade Agreement with India will be taken on and completed by the incumbent Scott Morrison who is scheduled to meet Modi in February 2020.