Skip to content
You are here
Home > Sport > Centurions Kohli, Jadhav star in India’s win against England in first ODI 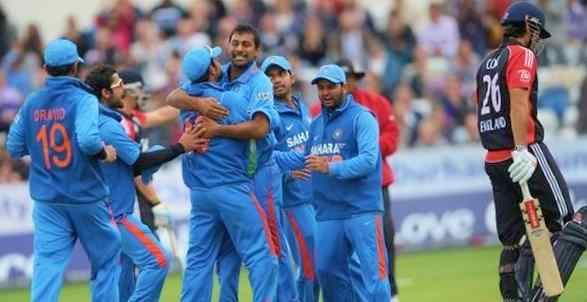 Pune, January 15: Virat Kohli and Kedar Jadhav slammed quickfire centuries to steer India to a three-wicket victory over England in the first One-Day International at the Maharashtra Cricket Association Stadium here on Sunday.

Chasing a difficult 351-run target, the hosts were tottering at 63/4 when the duo came together to add 200 runs between them in 24.3 overs. India now lead the three-match series 1-0.

Jadhav smashed 120 runs over a whirlwind 76-ball innings that included 12 boundaries and four sixes. He fell to pacer Jake Ball while attempting another big hit.

Hardik Pandya then scored an unbeaten 40 off 37 balls to ensure that India crossed the line with three wickets and 1.5 overs to spare.

Jake Ball was the most successful among the England bowlers with figures of 3/67 while fellow pacers David Willey and Ben Stokes returned 2/47 and 2/73 respectively.

Chasing a difficult target, the hosts were off to a poor start with the England pacers striking early blows.

The perennially underperforming Shikhar Dhawan was the first to go, edging Willey to Moeen Ali at third man.

Willey dismissed Lokesh Rahul — the other Indian opener — in his very next over with an inswinging full length delivery that uprooted the middle stump.

Comeback man Yuvraj Singh seemed to be in decent touch during his 12-ball stay in the middle that produced 15 runs. But he was done in by a poor piece of shot selection, edging a Stokes delivery which was sailing down the leg side to England wicketkeeper Jos Buttler.

Ball clinched the coveted wicket of Mahendra Singh Dhoni when the former India captain misjudged the bounce of a short-pitched delivery while attempting a pull.

The ball took the upper edge and lobbed up for an easy catch to Willey at midwicket as the hosts lost almost their entire top order by the 12th over.

But with the Indians seemingly tottering their way towards defeat, Kohli and Jadhav turned the tide with their dominant batting.

Following the duo’s departure, Pandya finished off the chase with Ravindra Jadeja and Ravichandran Ashwin providing excellent support at the other end.

Ashwin finished things off in style with a six off Ali in the penultimate over.

Earlier, half-centuries by Jason Roy (73) and Joe Root (78) helped England post a mammoth 350 for seven in 50 overs against India in their first One-Day International (ODI) match at the Maharashtra Cricket Association Stadium here on Sunday.

Besides Roy and Root, all-rounder Ben strokes (61) and wicket-keeper Jos Buttler also produced fine knocks and contributed handsomely to the visitors’ cause.

Put in to bat, England started the proceedings on a cautious note as both openers Roy and Alex Hales (9) were playing the ball to its merit.

Just when things seemed good for the visitors, India bounced back in style to sent back Hales in the seventh over with 39 runs on board. He was run out by medium pacer Jasprit Bumrah.

The fall of wicket brought in Root, who along with Roy forged a crucial 69-run partnership with an average run rate of 5.67.

In the 19th over, Mahendra Singh Dhoni planned a stumping dismissal of Roy off left-arm spinner Ravindra Jadeja as the batsman was terribly mistaken as the ball went straight on underneath his bat.

The fall of Roy’s wicket brought in skipper Eoin Morgan, who also contributed 28 runs and built 49-run partnership with Root for the third wicket.

But after seven overs, Morgan was sent packing by medium pacer Hardik Pandya with 157 runs on board. He gave an easy catch to Dhoni, who did not make any mistake.

Incoming batsman Buttler and Root then slammed 63 runs in 10 overs for the fourth wicket to put England on drivers’ seat before Buttler was caught by Shikhar Dhawan off Pandya in the 38th over.

The middle-order also stepped up to the occasion as Ben Strokes and Moeen Ali (28) stitched a 73-run partnership for the sixth wicket in just six overs.

Seventh and eighth wicket also contributed as they scored 34 runs in the end to post 350 in their allotted 50 overs.

For India, medium pacers Pandya and Bumrah took two wickets each while left-arm spinner Jadeja and pacer Umesh Yadav chipped in with one wicket each.