Skip to content
You are here
Home > Indian > Modi’s demonetisation has inspired Australia to act on black money, may demonetise: Australian envoy 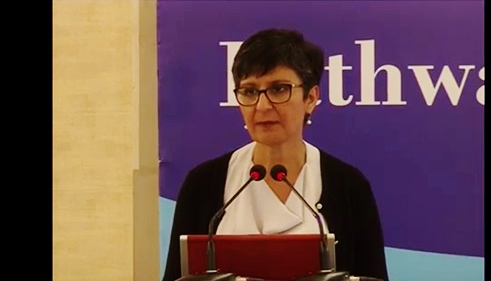 Melbourne, January 11: “We are watching India closely to see if we can learn something from this (demonetisation) process.”

Harinder Sidhu, Australia’s High Commissioner to India, said that following India’s demonetisation decision, there is talk in Australia about “demonetising our highest denomination note,” according to The Indian Express.

Ms Sidhu termed the demonetisation process in India as “the most radical policy I’ve ever seen put into effect” but she is watching with great fascination how it unfolds.

It could bring about a profound change for the Indian system, “if it works”, according to Ms Sidhu.

“I’m very impressed with how the government has been grappling with it. They have responded to so much public feedback and constantly tried to incorporate responses along the way.

“I appreciate the effort along with all the complexities involved”, she said.

Inspired by the move, particularly for tackling black money, she even indicated that it could “possibly even demonetisation — in Australia”. She referred to the black money task force recently introduced in Australia.

“There’s been some conversation about demonetising our highest denomination note. We are watching India closely…”

Referring to the defence relationship as “one of our great success stories”, Ms Sidhu said that it was due to common interests and sharing the Indian Ocean space as two maritime nations.

India and Australia conducted their first bilateral naval exercise only recently, when 4 Australian Navy ships visited India and reciprocal visits by chiefs of Army and Navy for strategic talks.

Ms Sidhu indicated that India-Australia relationship would not change with China becoming regionally dominant while Donald Trump led US withdrawing from the Asiatic region.

“India and Australia share common interests in stability. I don’t see that changing.

“It’s too early to say what a presidency under Mr Trump will or won’t do. I wouldn’t speculate — we’d rather work with the Trump administration.

“We have a very old alliance; our Prime Minister has reached out to Mr Trump…”

She also welcomed Indian migrants to Australia, saying Australia “is one of the safest countries in the world.

“Indians shouldn’t fear… Indians are the largest migrants to Australia”, with 20 per cent Indian migrants in the last year. Indian-born Australians have tripled in the last 10 years.

“Sometimes, random criminal acts are overread as racist atacks. The attacks on students in 2008 were not all racially motivated — but our government dealt with that squarely.

“We need to ensure people don’t put themselves in vulnerable situations, don’t walk late at night in certain parts of town — that applies as much in Delhi as in Australia,” Ms Sidhu said.