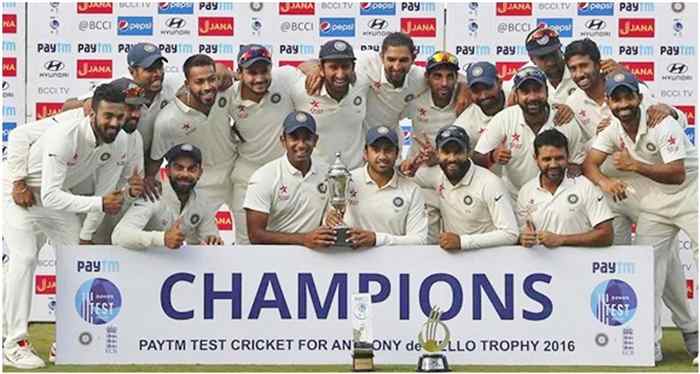 With 120 points in the 2016 Test team rankings, India is 15 points ahead of second-placed Australia

Chennai, December 20: India have ended 2016 as the top ranked Test team on the ICC rankings after registering a 4-0 victory over England in the five-match series which culminated with an innings and 75 runs win for the home side here, on Tuesday.

The series win has helped India gain five points. They have now moved to 120 points in the last Test team rankings update of 2016, 15 points ahead of second-placed Australia.

In contrast, England, who had started the series tied with Australia on 105 points but were ahead on decimal points, have slipped from the second to the fifth position.

England are now on 101 points, one point behind Pakistan and South Africa, who are both on 102 points with Pakistan ranked third on decimal points.

This means that four teams are now within four points of each other with the annual cut-off date of April 1 for the ICC awards not far away.

The ICC Test team rankings have seen an interesting year, with Australia, Pakistan and India all holding the top slot between August 21 and October 11.

The Virat Kohli-led side, which was awarded the ICC Test Championship Mace on October 11 following a 3-0 home series sweep over New Zealand, can’t be overtaken this year since the team rankings are updated only at the end of each Test series.

The next Test series to be completed is the ongoing one between Australia and Pakistan with the third and final Test slated in Sydney from January 3-7.

England ended the series on a sorry note with the fifth Test collapse versus India after an untimely batting collapse.

The tourists hit trouble with the loss of four wickets for 26 runs as they tried to battle for a draw at the MA Chidambaram Stadium before losing a further six wickets for 15 runs to confirm defeat.

Despite the best efforts of Moeen Ali and Ben Stokes, who showed some much-needed composure to reach 167 without further loss at tea, England could not hold their nerve and fell to a dispiriting defeat by an innings and 75 runs.

Cook said: “India are a better team here and they deserved to win. We tried as hard as we can but it wasn’t good enough. Credit to Virat and the team – they’ve outplayed us.”