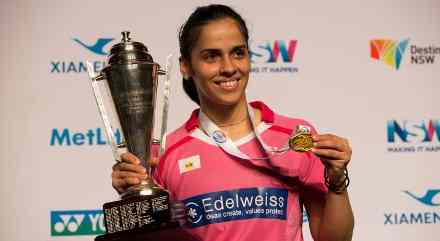 World No.8 Saina lost the first game 11-21 against the World No.12 Chinese before winning the next two games 21-14, 21-19 to clinch the championship for the second time in three years.

The match lasted for an hour and 12 minutes.

Now, the 2015 World Championship runner-up has a 6-1 lead in the head-to-head record against 22-year-old Sun.

It was the 26-year-old Hyderabadi’s seventh Superseries title.

At the start of the final in the $750,000 tournament, Sun caught a brilliant start, leading 9-4. And she made the advantage even bigger as she took straight four points to sit at a 15-8 lead as she stunned the experienced Saina with her powerful and sharp smashes.

After losing the first game 11-21, Saina put up a gutsy display to make strong comeback in the second game. The London Olympic medallist played with control and didn’t allow Sun to run away with the speed the way she did in the first game.

Sun came under pressure and made some unforced errors at the start. Saina held an 11-8 lead which later became 14-12 before the Indian rode the momentum to take three straight points that gave her a five-points cushion which she built on to seal the second game 21-14.

Former world No.1 Saina upped the ante in the deciding game and dominated the game. After an 8-3 lead got evaporated, thanks to Sun’s brilliance, the former world junior champion Saina equalised at 10-all and remained always in the lead thereafter.

Saina’s nearly flawless game made Sun to force the issue and the young Chinese made some faults out of desperation, especially at the smashes that went long and wide.

However, Sun battled hard and remained in contention. When Saina bagged three consecutive points to hold an 18-14 lead, the Chinese refused to give in, taking three points on the trot to sit at one point difference.

The Indian then again moved on to 20 by taking two straight points but Sun kept fighting hard but finally, she hit the net to give Saina the game at 21-19, with it the title.