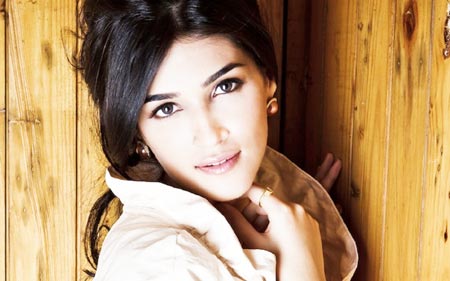 New Delhi: Kriti Sanon, who shifted gears from being an engineering graduate to becoming a model and actress, says she was very studious as a child.

“I was very ‘padhaaku’ (studious), at least till the second year of college. I couldn’t sleep if I hadn’t finished my course. I couldn’t eat also. I used to walk and learn things,” Kriti told IANS over phone from Mumbai.

“My mom is a professor and she used to help me make tests and prepare for viva. I was ‘padhaaku’, and used to get 90 per cent plus always,” she added.

A Delhi girl, Kriti pursued a BTech degree in Electronics and Communication Engineering.

“In college, you realise you can relax a bit. I was also multi-tasking between ad campaigns, attendance and getting my notes done. I got 87 per cent, which I am proud of,” she added.

Besides being conscious about her studies, Kriti says she was always focussed on giving her best shot to whatever she took up.

“It’s been inside me that I can’t leave things undone. I have to give my best to what I have to do,” added the actress, who has been appointed Education New Zealand brand ambassador.

In this role, she will be a catalyst in supporting the educational and career prospects of students from India to New Zealand.

Kriti Sanon began her career with modelling. She made her acting debut with Sukumar’s Telugu psychological thriller film 1: Nenokkadine. Her first Bollywood film was Heropanti, for which she won the Filmfare Award for Best Female Debut. In 2015, Sanon starred in the romantic action comedy Dilwale. In February 2016, Sanon signed on by Dinesh Vijan for his directorial debut, Raabta, opposite Sushant Singh Rajput which was released in June this year. The movie had mixed success.

This movie, although met with mixed success, Kriti has landed in a very passionate and loving relationship with her co-star Sushant Singh Rajput. Sushant’s split with his ex-girlfriend Ankita Lokhande was still fresh in the public psyche when Kriti entered his life.

“Even before the ashes of a painful break-up of Sushant Singh Rajput – Ankita Lokhande could settle down, the latest buzz doing the rounds is that SSR has moved on and found love. Sushant and Kriti Sanon have been shooting for their upcoming film ‘Raabta’ in Budapest and their recent Instagram picture suggest that the two are certainly bonding pretty well.

“As per the latest updates, Kriti has been telling her friends that this is the happiest phase of her life, reported BollywoodLife.com. Well, we all know rumours of a possible link-up between co-stars is common but the fact that the rumours surfaced right after Sushant’s split with Ankita Lokhande is something to ponder upon”, wrote an Indian media report.