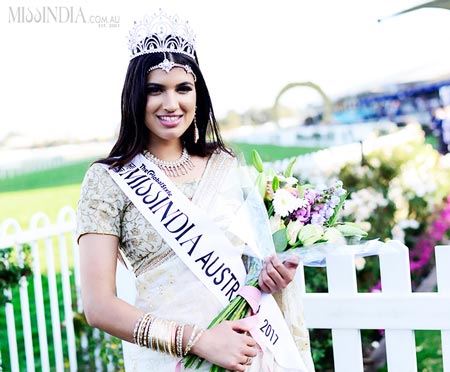 Aarzu Singh of Gold Coast, Queensland, has been crowned Miss India Australia 2017 in Sydney, an organisers of the event have said.

Mallika Raj from Canberra was the runner-up.

Aarzu Singh, 20, won the beauty pageant title on the basis of overall performance at official auditions and talent workshops held in Melbourne and Sydney.

The names of the winners were announced at a function at the picturesque Australian Turf Club at the Rosehill Gardens by Sydney-based Bollywood talent mentor and consultant Raj Suri, who launched the beauty pageant in 2003.

He is also the founder of The Global Style – launched the fashion/talent hunt in India in 2015 along with India’s iconic fashion designers as patrons. Raj has worked on projects as diverse as international talent grooming, image building workshops, Bollywood talent mentoring, Bollywood film publicity and fashion productions from concept to print.  A true creative visionary and diversity campaigner, Raj Suri founded the Miss India Australia missindia.com.au  in 2001, with the vision to contribute positively to the multicultural contemporary Australia and beyond. Raj’s Miss India Australia.