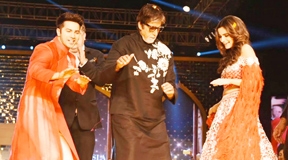 Varun Dhawan, Alia Bhatt were kids again, when Amitabh Bachchan shook a leg with them.

During the charity fashion show in Mumbai, Varun Dhawan broke into an impromptu jig to “Mere Angne Mein” as Amitabh Bachchan and Alia Bhatt joined him.

It was Charity with Stars 2017 fashion show to raise funds for cancer patients and a lot of film and television personalities were seen walking the ramp for designers Shaina NC and Abu Jani-Sandeep Khosla. But the highlight of the show was the dancing moment that Bachchan shared with Varun and Alia.

The Badrinath ki Dulhania lead actors got their personal Bachchan moment, while the audience regaled seeing Big B loosen up.

Big B on Sunday night shared a few photographs from the event on social media.

“Walk the ramp for a charity that works for the cure of children from blood cancer… Every child deserves to live long and healthy,” Amitabh tweeted.

The 73-year-old actor also wrote on his blog that each child deserves a long and complete life and a healthy one.

“Donating to the cause is providing that opportunity to give the unfortunately ill another life,” he added.

Funds raised from the show will be donated to the CPAA towards treatment of children suffering from blood cancer.

On the professional front, Amitabh will be seen in “Sarkar 3” and will also be seen sharing screen space with superstar Aamir Khan in the upcoming film “Thugs Of Hindostan”.