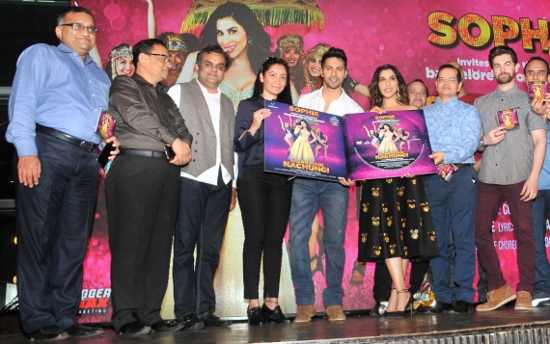 Mumbai, September 1: Sophie Choudry’s newest single ‘Sajan Main Nachungi’, which is touted to be the ‘Sangeet Anthem’, is gaining traction from B-towners and fast becoming a rage.

Before unveiling the teaser to the media, Sophie’s dear friend Sonam Kapoor launched the teaser of the song exclusively on her app – a perfect Bachelorette number.

Post that the single was released with much fanfare last week, with a horde of tinsel town stars including Varun Dhawan, Manyata Dutt, director duo Abbas Mustan and Neil Nitin Mukesh.

The stage witnessed an unforgettable evening when Sophie Choudry performed live & exclusive as she captivated the audience with her performance at the launch.

Champak Jaain of Venus Worldwide Entertainment says “Sophie has done an outstanding job in the single. It is after 3 years that she is coming up with her single & we are proud to release it under our label.

The song is peppy and captures the essence of bachelorette. At Venus we aim to present the best to the audience”

Sophie Choudry said, “I’m glad that music videos are becoming a thing again… because of artists like Honey Singh, Badshah… but most of them still have actors in the lead roles apparently leaving no difference between a movie song & a music video.

“Cast an actor by all means but give the singer the scope to perform as well otherwise this is just another form of playback singing,” shares Sophie.

Basking in the glory of her new hit track, “I miss the days of Nazia, Alisha, Shweta, Shaan, Lucky Ali, Euphoria & many more.

“At one point music videos were bigger than film songs because they were sexy, fun, glamarous… then every single person wanted to make sexy remix videos & gradually the market just died. I hope it doesn’t happen again,” signs off Sophie.

The single directed by Colossus – Ajay & Lovel has vocals by Sophie Choudry, picturised around a bachelorette party.

The single ‘Sajan Main Nachungi’ opens with a fun opening verse and then launches into club mode with the party beats. When the song speeds up the tempo, it sounds very punjabi-like which enhances the danceable mood of the song.

Although the song has a western touch, it is undoubtedly high on its Hindi & Punjabi feel.