Skip to content
You are here
Home > International > Away from limelight, a Muslim promotes Yoga in Pakistan 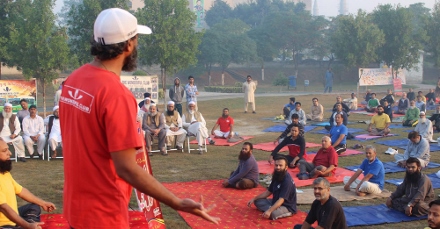 In a country where Islamic rightwingers very often call the shots, Haider, 47, has quietly succeeded in attracting tens of thousands to yoga, achieving a feat that once seemed near impossible.

On June 21, when the world celebrated the second International Day of Yoga, Haider did yogic asanas along with his 20,000 yoga students across Pakistan — but minus media publicity.

While others around the world got plenty of publicity, Haider’s success went unnoticed.

“We are also practising in yoga in a nice way in Pakistan but without beating the drums,” the modest Haider told IANS in a telephonic interview.

If Haider is to be believed, Pakistanis celebrated the International Yoga Day in almost all major towns and cities including Islamabad.

Born in Pakistani Punjab, Haider is emphatic – in contrast to what many Muslims think – that yoga has nothing to do with the Hindu religion and should be accepted by people of all faiths.

Muslims, he suggests, should do at least five minutes of meditation – a key component of yoga – after every “‘Fajar Nimaz” or early morning prayer.

“Yoga helps to gain mental stability, peace, balanced living. Moreover, it teaches us discipline which is vital in Islam and all religions.”

What does he say about critics who link yoga with religion? “Agar ache cheez be burey hathoon mai aajaye, tho woh cheez be kharab hoti hai (Even if bad people touch good things, the good too become bad),” is his stock reply.

Rightwing fanatics in Pakistan insist yoga is a Hindu ritual.

“Yoga belongs to humanity in the form of a pure science and is not the sole entity of India,” he said, speaking in Urdu.

“While Indian Hindus and Muslims fight over its origin and practice, our clubs have people from all sects of Muslims, Christians and Hindus who have made it a part of their life to reap its health benefits,” Haider said.

Among the over 50 yoga clubs in Pakistan, Haider oversees the major ones in Islamabad, Lahore and Rawalpindi. Even some Islamic clerics come to the centres to learn and practise yoga and meditation.

“I have top clerics of (Islamabad) as my students. They are happy about it and they encourage others to join.”

Haider, who sports a flowing beard, is an eternal optimist. “I want yoga in every school, every community in Pakistan.”

The man married recently one of his students who came to him with various health issues after being denied treatment by many doctors and hospitals. “She came for yoga sessions. By the grace of God, she is doing absolutely fine now.”

Haider has some 60 trainers. His wife, Shumaila, looks after the female students.

He says his inspiration and role model was the late S.N. Goenka, the Myanmar-born master of Vipassana meditation.

“He taught me meditation when I travelled to India. That changed my life. After that I started yoga sessions in Pakistan. He was my hero.”

When he was in Saudi Arabia early on, Haider suffered pain in appendix and was suggested an operation. He refused and instead went on to read books on Mind Science by a Somalian decent doctor.

“After reading the books, I started feeling visible changes in my life. Then I dug more and that led me to learn yoga,” said Haider, who travelled to China, Tibet, India and Nepal to learn the ancient science.

Haider holds both free and paid sessions. The Pakistani government has granted him permission to hold yoga camps on its land and has also allowed him to promote yoga.