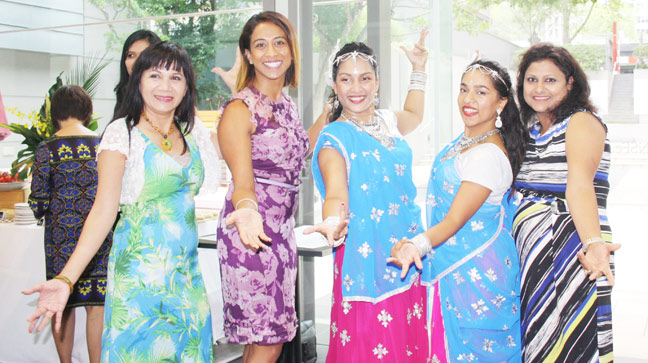 Launching the campaign at the Atrium Room of the Immigration Museum in the CBD, Dr Hiranthi Perera, PapScreen Victoria Manager said that, “Regular Pap tests are recommended even if you are currently single or widowed, or have only had one partner. Pap tests are also just as important after menopause.”

All women aged 18 to 70 who have ever had sexual contact are encouraged to have a Pap test every two years. A Pap test is a simple check that looks for cell changes on the cervix that may lead to cervical cancer if left untreated.

“Cervical cancer is a very preventable disease but our research shows that some communities may be less likely to screen,” Dr Perera told when introducing the videos at the launch.

Dr Perera talking to Bharat Times after the launch said that “20% of cancer related deaths in Indian women are due to cervical cancer”.

With the Indian community growing in Australia, it became important for “work to be done around creating awareness about cervical cancer and screenings, which led to this video”, Dr Perera said.

The campaign ‘Every woman, every 2 years’ emphasises the importance of Pap tests every 2 years – and these videos are part of a larger multicultural campaign on print and radio in seven languages for the new ‘Pap Smear campaign’ featuring Hindi and Vietnamese women and doctors from Victoria.

The importance was prompted when Pap Screen Victoria became aware that India does not have a nationwide screening program, with most cervical cancer cases detected in late stages.

Talking about inhibitions and taboos surrounding sex in Indian women, Dr Perera clarified that women need “not necessarily ask your regular GP for a Pap Smear.

“You can go to any doctor you are comfortable with.”

Both the test and the results are confidential and it is fine to ask for a female family doctor or nurse to perform the test if you prefer.

“In Australia we are very fortunate that women can have Pap tests, and therefore the opportunity to protect themselves from cervical cancer.”

The Victorian Cervical Cytology Registry 2014 annual report released today shows less than half of women aged 20 to 29 years are being regularly screened for cervical cancer, with test rates of women in this age group falling more than 8 per cent from 52.7 per cent in 2006-2007 to 46 per cent in 2013-14.

Young women are being urged not to be complacent with the falling numbers in cervical screening.

The report also reveals that in Victoria, 74 per cent of women diagnosed with cervical cancer either never had a Pap test or had let their screening lapse prior to diagnosis.

The city of Wyndham with high concentration of Indian-origin women; stands at a state-low of 49.4%.

In a statement, Minister for Health Jill Hennessy said that “We all know Pap tests can be awkward but it’s not worth risking your life over – if you’re overdue for a test, book in today because that awkward Pap test could save your life.”

The rates of women having regular (every two years) Pap tests in some areas of Indian concentrated areas as below:

Shivani Goel, a face of the India-focus campaign, lives in Williams Landing – a growing suburb of city of Wyndham.

She said that many within the Indian community lacked awareness of importance of cervical screening and details her own lack of knowledge about the screening process in the campaign video.

She said “I go for regular tests myself… and I am happy to be able to spread the importance of this message.”

The multilingual video campaign was launched in Hindi and Vietnamese with more languages to be featured, including Punjabi.

Ask your doctor or community health nurse or call TIS on 13 14 50 and ask to speak to a Cancer Council nurse. Cancer Council can also help you find a doctor or nurse who speaks Hindi and Punjabi at a clinic near you.