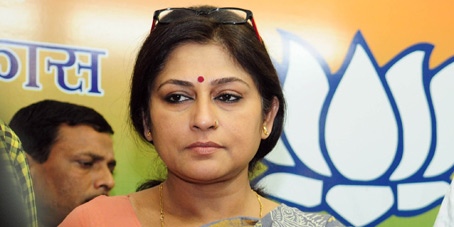 New Delhi March 18:Actress Rupa Ganguly of teleserial ‘Mahabharat’ fame and former state BJP chief Rahul Sinha are among 194 candidates whose names have been announced by the party on March 18, for the West Bengal assembly polls.

The announcement was made following a meeting of the party’s central election committee (CEC) attended by Prime Minister Narendra Modi and BJP president Amit Shah.

Ganguly, who is the party’s state women’s wing chief, will try her luck from Howrah North while Sinha will contest from Jorasanko seat in Kolkata.

Former state party youth wing president Amitava Roy will be in the fray from Barrackpore and actor Suman Banerjee from English Bazar, it has been announced.

Union minister and CEC secretary JP Nadda said the party has given representation to “all sections” of society in list. He said young candidates have been preferred and 26 women figured among the candidates announced so far.

With this announcement, BJP has declared its candidates for 246 seats in the 294-member state assembly.

West Bengal will have elections in six phases between April 4 and May 5.