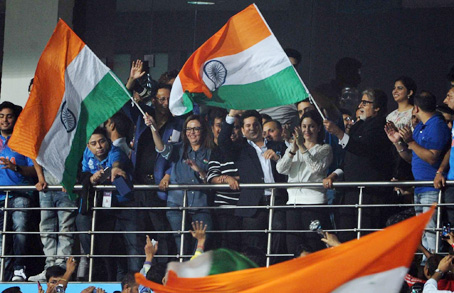 Kolkata, March 20: The Indian middle order’s most trusted soldier Virat Kohli anchored a tricky chase to enable his side humble arch-rivals Pakistan by six wickets in a rain-curtailed World Twenty 20 group 2 tie at the packed Eden Gardens here on Saturday.

The hosts, thus, kept intact their all-win record against the neighbouring nation in World Cup matches.

Kohli top-scored with an unbeaten 55 of 37 balls, while captain Mahendra Singh Dhoni remained unconquered on 13, as India reached their target of 119 losing only four wickets with 13 balls to spare. Earlier, Pakistan had posted 118/5 in the shortened 18-over game.

It was a day of evens-stevens in the two countries’ cricket rivalry, as the Indian women lost out to their counterparts from Pakistan by two runs via D/L method in the World Twenty20 at the Ferozeshah Kotla in Delhi.

At the Eden Gardens, Pakistan bowler Mohammad Sami returned figures of 2/17, as the visitors suffered their first loss to India at the historic venue in any limited over game. Having set a target of 119 runs, Pakistan pacers were able to make early inroads in the famed Indian batting line-up. Mohammed Amir claimed Rohit Sharma before Mohammad Sami uprooted the stumps of Shikhar Dhawan and Suresh Raina of consecutive deliveries. India were then tottering at 23/3 inside five overs.

Yuvraj Singh and Kohli — the pair instrumental in India’s Asia Cup victory against the same opponents a few weeks back — then came together in a 61-run stand. They did not take any undue risk but pounced upon the loose balls. After 10 overs India had recovered to be at 60/3.

Thereafter, both batsmen delighted the crowd with some stupendous stroke play which included a monstrous hit from Yuvraj against Wahab Riaz. But the same shot led to his undoing four balls later.

Kohli then tried closing the innings in style with some scintillating boundaries against the likes of Amir and Shahid Afridi. At the other end, skipper Mahendra Singh Dhoni was content in running the singles and giving his partner the strike. But with seven runs needed Dhoni lofted Mohammad Irfan for a straight six. Earlier, put into bat, Pakistan managed to set India an asking rate of 6.61 runs per over with Shoaib Malik (26) being the top scorer.

For India, spinners Ravichandran Ashwin and Ravindra Jadeja returned economical figures of 0/12 and 1/20, respectively. Off spinner Ashwin was able to get quite some purchase off the Eden strip from his very first over. At the other end, Ashish Nehra and Jasprit Bumrah were able to keep a tight leash on the willowers, who managed only 24 in their power play of five overs. Part-time off spinner Suresh Raina then got rid of Sharjeel.

The left-hander’s mistimed loft was gobbled up by Hardik Pandya who took an outstanding catch diving forward much to the delight of the 67,000 vociferous supporters. Shahid Afridi promoted himself up the batting order to have a go but he too found it difficult coping with the turn. Shahzad, feeling the pressure at the other end, tried a heave against Bumrah but only managed to get it to point, where Jadeja took the catch running back a few steps.

After 10 overs, the visitors were 51/2. With the innings running out of steam, Afridi (8) tried to belt a few against the inexperienced Hardik Pandya. But his first hook against the youngster ended straight down the throat of Virat Kohli at long on in the 12th over.

Malik and Umar Akmal then got together to carry forward the innings. The duo struck Pandya for 15 runs in the 14th over which included two big sixes. But then, Akmal (22) and Malik departed in quick succession which pegged Pakistan back further.