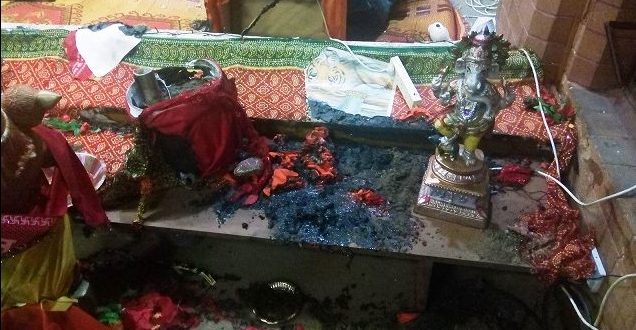 A Hindu Temple situated at Regents Park in Sydney Australia has been set on fire and all statues and icons of Indian Godheads have been smashed and left in ruin. They do not know who has done it but it has caused lot of pain and anguish to devotees celebrating the festival NavRatri or nine nights dedicated to worship of God in female form. Popularity of the NavRatri period for Hindus can be compared to popularity of Christmas to Christians but it continues for a period of nine days to worship nine different form of female Shakti or source of power or God manifest as and in this world.

The temple has been there for about twenty years and but for an incident of stone throwing ten years ago, the Fiji Hindu community has not had any problems until now. During the period of nine days, Hindus hold regular Prayer sessions in the evening. When devotees came at 6pm to open the temple on Sunday evening 14th October 2018, they found smoke coming from inside their temple. Upon investigation, they found some people inside and when challenged, the miscreants jumped out of the window and vanished.

The head priest of the temple Pandit Paras Ram Maharaj was in tears on seeing his Gods broken and strewn all over the floor. The Vandals had not only desecrated the God statues and icons but had also shamelessly thrown prayer material around. They had even set the alter on fire. Luckily the fire was quickly brought under control before it could do any further damage to the temple and the building. The temple is visited regularly by about 250 devotees who come from all over Sydney including from places as fas away as Penrith.

After serial coup in Fiji, a large number of Fijians of Indian descent had migrated to Australia. About twenty years ago, some of them collected funds while others put their homes on mortgage to raise funds and purchased an old Anglican church building. The devotees were all Hindus and brought their own Hindu icons to install in their new temple. Being an old church building, the building has a typical church architecture with lead glass color tinted windows and a wooden cross which is almost a part of the wall.

God is one. People worship HIM in different forms

Although as owners of the building, they could have removed previous faith symbols, the temple committee decided not to remove or dismantle old christian symbols. They placed their Gods beside these symbols and started their worship in their new temple. There is only one God and different people worship HIM in different forms believe Hindus. So, how could these Hindus show any disrespect for the symbols of God worshiped by HIS earlier and different devotees.

The make-shift temple
For now, the kitchen building next door has been vacated and converted into a make shift temple to continue the most important rituals of the day.

The NSW police and forensics have commenced work on this attack.

“Vandalism of a place of religious gathering, which is central to its community, is deplorable.

“The Australian Government condemns this vandalism and any actions that seek to discriminate against the diverse cultures and communities that call Australia home.

“These actions go against the very essence of Australia’s society. The vast majority of us respect the democratic values upon which the nation is founded—the rule of law, freedom of faith, tolerance and equality.”

The big worry for the group now is to rebuild and restore the building to its pre-attack eminence and for that to raise funds. Readers can make donations to help rebuild the temple at https://bhartiyemandirsydney.org/donations/

It is time that Australians of all walks of life show their solidarity with these new Australians.

Federal minister for Immigration and Multicultural Affairs David Coleman has expressed his concerns.