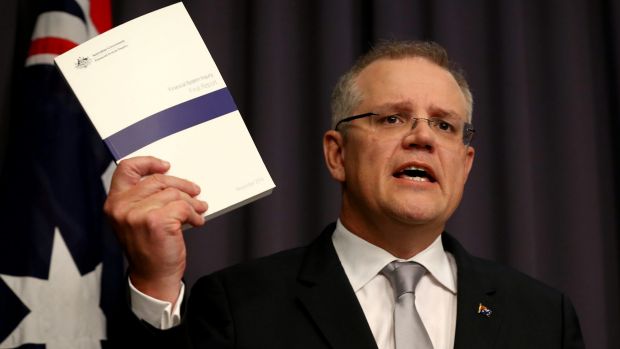 Canberra: Treasurer Scott Morrison delivered his Mid-Year Economic and Fiscal Outlook (MYEFO) last month and confirmed that the Budget remains on track to return to balance in 2020-21.

“Despite the many challenges faced, this is the Government’s fifth consecutive budget update with a projected return to balance in 2020-21”, he proudly claimed.

Since the 2017-18 Budget, the underlying cash balance has improved by $9.3 billion over the forward estimates.

In addition, the Government is now not expected to need to borrow for recurrent spending from 2017-18, which is a year earlier than was expected at the time of the 2017-18 Budget. This would be the first time since the Global Financial Crisis that this has been the case.

It all sounds good and heralding prosperous times for all Australians – for those who are currently Australians domiciled in Down Under – but not for those who are yet to arrive to call Australia their “home”.
A fine-line fine-print measure included in the savings – to raise A$1.3 billion is the extension of waiting period from two to three years for the newly arriving migrants to access centrelink.

Under the new Centrelink regime, newly-arrived migrants will have to wait three years before receiving a range of welfare payments and this one year extra wait will yield $1.3 billion for the government in the next four years.

Now it will be three years before migrants can receive Newstart or family tax benefits, paid parental leave or carer allowances effective July 2018.

The government views this as part of measures it is putting in place “encourage self-sufficiency” among new migrants.

Welfare groups have slammed this announcement by the government and labelled it as a “worrying step”.
And the Federation of Ethnic Communities’ Councils of Australia (FECCA) one of Australia’s leading migrant advocacy groups, disagrees. It says the Government’s plans to extend the waiting time for new migrants to access welfare payments will hit the most vulnerable of new arrivals.

“We are disappointed by this decision to extend the waiting period for benefits to three years from its current two years,” Ms Patetsos said.

“FECCA believes that this move will create an underclass of migrants—new arrivals who find themselves at even more risk financially as they try to settle into Australia.

“These measures will negatively impact the Australian born children of migrants and disproportionately affect women.

“They will also disadvantage migrant families and will create unnecessary hardship by restricting access to paid parenting leave.

“The reality is that migrants who come here have always needed time to establish themselves in housing and employment.

“The relatively small amount of budgetary savings are going to impact quite severely on some of our most disadvantaged people, vulnerable families, and young children.

“We appeal to the Government to rethink this measure,” Ms Patetsos said.

If it is any consolation, there will be some “exemptions” for “vulnerable groups”, as well as for some New Zealand citizens with children in their care.

To the concerns of migrant Australians, from now, those bringing relatives over to Australia on a family visa will also need to guarantee their financial independence for three years.

“The government is just catching-up with the ‘new migrant culture’ as many family visitors to Australia have left Australia after taking their world class treatment without paying their bills. And the health system is left chasing their next of kin – who stating the obvious ‘refuse to take any responsibility’ and dodge phone calls or other modes of communication”, says John Southgate, a retired elderly analyst of migrant background.

On the other hand, Chandra Kumar’s mother was refused visa without full medical insurance being bought and she was unhappy; she had to buy cover for her mother to travel to Australia.
“If my mom falls ill and has to use Australian hospitals, what difference would it make to such a prosperous country like Australia? I came here more than a year ago and has been working all the time, paying my taxes…”.

But the government is not buying this ‘generosity’ line. Instead, prudent economics and what the Australian electorate expects it to do is what guide its policy. No wonder Social Services Minister Christian Porter suspects many people would be surprised to learn migrants could access some family and parental payments immediately after arriving in Australia.
“Australians’ expectation of newly-arrived migrants is that they contribute socially and economically for a reasonable period before having access to our nation’s generous welfare system,” Mr Porter said.

Interestingly, continuing to push the ‘self-sufficiency’ line throughout Australian society, the government has still kept money allocated for the controversial plan to drug test welfare recipients, despite the trials being put on the back burner.

“We remain committed to it and we continue to work with all non-government senators in order to a secure majority (support) for what is a very, very important welfare reform measure”.

Roughly 50,000 families and 30,000 others receiving Centrelink benefits are expected to come under the scanner by the time the scheme is fully implemented in 2020-21.

For the newly arriving migrants, from July 2018, provided the legislation passes through the parliament, they will be waiting three years before they become entitled to access welfare system.

And to end on a heartening note for newly arriving migrants, should they be buying a house sooner than three years, they should be able to benefit from the Government’s measures allowing the first home buyers to save for a deposit inside superannuation through the First Home Super Saver Scheme. Amen!
– Vir Rajendra