Skip to content
You are here
Home > Entertainment > Did Harvey Weinstein once eye Aishwarya? 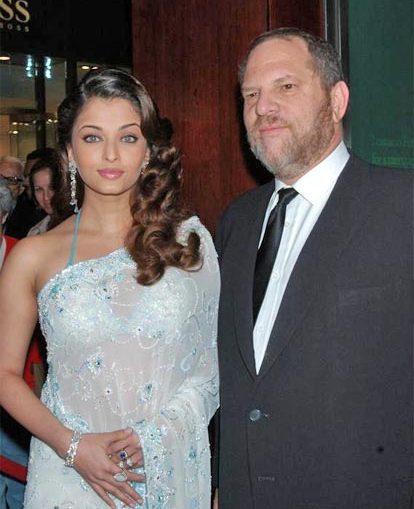 Casting couch and trading sexual favours for roles and foothold in Bollywood is nothing new. In the yester years, girls kept quieter. Those who ever wondered if actresses like Aishwarya Rai Bachchan, Priyanka Chopra and Deepika Padukone had to face any of that in Hollywood when they attempted to make forays there, the case of Harvey Weinstein has opened some can of worms, well thankfully not exactly for Aish but for him. Money and crave for fame it seems, can land girls into hot waters. For those willing to trade, it would be no big deal. But for others, entry into Hollywood and international fame at what price?, is the million dollar question.

Harvey Weinstein and Aishwarya Rai had met. And it was interesting.
In a report, talent manager Simone Sheffield has revealed about how Harvey tried to get Aishwarya Rai Bachchan alone with him but her manager saved her from him.

She stated that when she used to manage the ‘Devdas’ actress, she found it comical how hard Harvey tried to get Aishwarya alone. She called him a “big bully pig”, as he asked her to leave the meeting numerous times and she politely declined. Simone further said that when they were leaving his office he cornered her and said “what do I have to do to get her alone?” and she told him to kiss her “black ass”.

When Ash and she returned to their hotel, Simone sent Harvey a steel pig trough filled with diet soda as a thank you gift for the meeting.

She revealed that he eventually threatened her and told her that she would never work in the business. Whatever it may have taken, she said she never gave him the opportunity to even breathe on Aishwarya.

The producer and studio executive Harvey Weinstein, has been accused by many Hollywood personalities have like Angelina Jolie, Gwyneth Paltrow, Ashley Judd and Kate Beckinsale that they were subjected to abuse from him.

The producer has been accused of sexually harassing them over a period of nearly three decades.