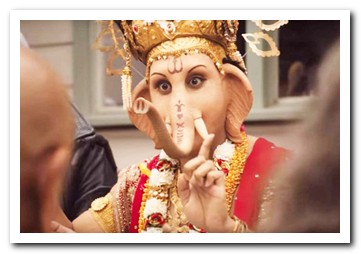 Melbourne, September 5: Hindus are irate over the latest advertisement of Meat and Livestock Australia (MLA) in which Hindu God Lord Ganesha is ridiculed and shown as feasting on Lamb.

Apparently prophet Muhammad is unable to show up due to a “daycare pick-up”.  It is however known that the Muslim religion prohibits from featuring the Prophet in picture.

“This time around we are highlighting the diversity of religious beliefs, backgrounds and dietary requirements in modern Australia.”

However, the advertisement has drawn the ire of followers of Hinduism due to its depiction of the god Ganesha eating MEAT.

A typical Australian woman at the table says she follows no religion, representing the largest growing “religion” in Australia, to which Hindu god Ganesha responds, “we really need a better marketing team”.

Hinduism is the oldest religion in the world, “considered as a way of life” as noted in the scriptures. This religion has survived many onslaughts through religious and non-religious wars, with about 1.1 billion adherents and a rich philosophical history.

Not only Hindus are inherently vegetarian due to traditional value of life, it is considered sacrilege to feature any Hindu God eating meat.

“Hindu Gods are always scripturally featured as vegetarians, following a satwik way of life,” said Pandit Maheshwari who works as a Hindu preist in Melbourne.

It has infuriated Victorian Hindus who are seeking immediate ban and withdrawal of the advertisement and unconditional apology. Rajan Zed, president of Universal Society of Hinduism, claimed the advertisement “made fun” of Ganesha and called upon MLA to issue an apology or withdraw the ad immediately.

“I am Indian by birth, I am vegetarian and I also am Hindu. Ganesha is a God that I believe in and one of the most worshipped deities in the Hindu religion. Any Indian function doesn’t start without praying for Ganesha who is the remover of obstacles.

In a post on LinkedIn, he wrote that the advertisement went “a bit too far”.

While the intention of the campaign was to create more unity among people of diverse faiths and enjoy a good conversation and food, Kumar said, the advertisement “fails to respect the sensitivity associated with diverse cultures and the reason why some religions don’t eat certain food”.

While many Hindus do eat lamb, yet it is considered blasphemy to allow featuring Ganesha eating lamb.

“While other religions were featured with their ‘Lord’s messenger’ like Jesus, why was it necessary to feature a Hindu God eating meat” asks Kailash Patel, who runs an Indian grocery store in Melbourne.

“Ganesha was meant to be worshipped in temples or home shrines and not to be used in selling lamb meat for mercantile greed”, Mr Zed president of Universal Society of Hinduism said, seeking immediate ban on advertisement and apology from MLA.

The Advertising Standards Bureau Meat and Livestock Australia (MLA) advertisement has already received a number of complaints regarding the advertisement.

Victorian Minister for Multicultural Affairs Robin Scott talking to Bharat Times said that he was “disappointed”.

“It has caused offence to many Victorian Hindus. We are a proudly multicultural state, where all Victorians have the freedom to be who they are and celebrate their culture and traditions with pride.

“Meat and Livestock Australia should listen to the Hindu community and take their feedback on board before airing the commercial again.

The Minister also confirmed that he would be personally writing to the organisation to express his concerns about featuring Lord Ganesha eating meat.

The Hon. Inga Peulich, shadow minister for multicultural affairs in Victoria, seemingly refraining from taking a position on the issue, called on the Victorian Multicultural Commission (VMC) to take the lead. Ms Peulich through a media release said:

“There is always cause for concern when religions, religious practices or peoples values and views are unfairly or inaccurately depicted…”.

“The VMC needs to take a lead and engage with Meat and Livestock Australia to resolve this matter”, Ms Peulich concluded.