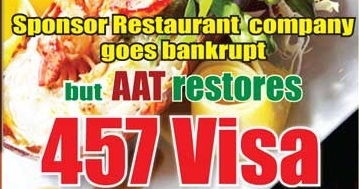 This is a good news story of Jaswinder Singh. An Indian citizen, he arrived in Australia on 24 November 2007 as the holder of a subclass 573 visa valid until 30 September 2011. He was 23.

He was subsequently granted the subclass 457 visa to work as a Cook (ANZSCO 351411) at a Seafood Restaurant at the Gold Coast.

The restaurant owner company – became bankrupt (insolvent) by an order of the court on in February 2016. The company had ceased trading in December 2015.

In June 2016, the Department was informed that Jaswinder had ceased employment with his sponsor, because of the bankruptcy (insolvency) of the sponsor.

The restaurant where Jaswinder was working was taken over by another company and he continued to work in the restaurant without a break.

But there was a time lapse (BT believes more than 3 months) between the sponsor company going bankrupt and the second company taking over the restaurant or offering to sponsor Jaswinder afresh.

Given the above, the department took the view that Jaswinder had not been employed in a nominated position for more than 90 days.

“As such, Mr Singh has not complied with condition 8107” the department concluded and on 8 August 2016, the department notified him of intention to consider cancellation

On 17 August 2016, Jaswinder through his migration agent responded to the notice with the documentation which included both the previous sponsor and the incoming sponsor company’s financials and other documents.

Jaswinder’s visa was cancelled on the basis that he had breached 8107 condition of his visa and there was no evidence that incoming sponsor company was an associated entity (as defined by section 50AAA of the Corporations Act 2001) of his sponsor company which had become bankrupt (insolvent).

(3) If the visa is, or the last substantive visa held by the applicant was, a Subclass 457 (Temporary Work (Skilled)) visa that was granted on the basis that the holder met the requirements of subclause 457.223(2) or (4):

(i) must work only in the occupation listed in the most recently approved nomination for the holder; and

(ii) unless the circumstances in subclause (3A) apply: …

(aa) subject to paragraph (c), the holder must:

(i) if the holder was outside Australia when the visa was granted — commence work within 90 days after the holder’s arrival in Australia; and

(c) if the holder is required to hold a licence, registration or membership that is mandatory to perform the occupation nominated in relation to the holder, in the location where the holder’s position is situated—the holder must:

At the Tribunal, Jaswinder produced a copy of an approval as a standard business sponsor, a copy of a nomination by his new sponsor to work as a Cook (ANZSCO 351411), and other supporting documents. He pleaded his visa was cancelled through no fault of his, as the sponsor and owner of the restaurant had gone into bankruptcy (liquidation).

He had continued to work in the nominated position at the restaurant until the cancellation of the visa.

And he confirmed that the new owners of the restaurant have nominated him to work in the same position at the same restaurant at which he was working under the previous sponsorship.

Jaswinder, after cancellation of his visa, successfully sought and obtained permission from the Department to resume working at the restaurant, and had continued to do so.

Evidence was produced to show the new sponsor company was the new owner of the same restaurant where Jaswinder was working.

A visa may be cancelled under s.116(1)(b) if the Minister or the Tribunal is satisfied that the holder did not comply with a condition of their visa. In this instance the applicant’s visa was subject to condition 8107, which so far as it is relevant is attached to this decision.

The information contained in the delegate’s decision was that the sponsor company thought wrote to the department on 1 July 2016, but had ceased trading in December 2015.

In light of the that fact, although Jaswinder had continued to work in the same position at the same restaurant since he was granted his subclass 457 visa, apart from a period after his visa was cancelled when he did not have permission to work, the Tribunal found he had ceased working in the nominated position when his sponsor company ceased trading which was in December 2015, and thus more than 90 consecutive days.

Thus Jaswinder was found to be in breach of condition 8107 and the Tribunal found that the department had the ground to cancel the visa.

For these reasons, the Tribunal is satisfied that the ground for cancellation in s.116(1)(b) exists.

Cancellation is not mandatory, it is discretionary

But that ground does not require mandatory cancellation under s.116(3). And the Tribunal considered whether the power to cancel the visa was appropriately or should have been exercised.

The Tribunal generally has regard to the relevant circumstances of each individual case and found as follows: