Skip to content
You are here
Home > Entertainment > ‘Pink’: A modern masterpiece – that sucks us deep in anxiousness 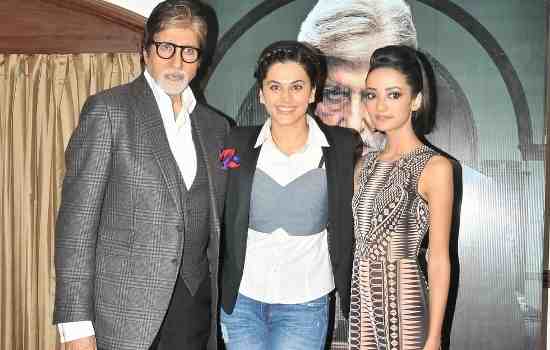 How many films have you seen where you forget you are watching a film, where the line dividing the audience from the characters get so blurred as to make the distinction almost redundant? writes Subhash K. Jha in his review of Pink

“Pink” sucks us so deep into its characters’ lives that we come away breathess and anxious.

For almost ten minutes after the end-titles, I couldn’t move from my seat. I had just seen what three Delhi girls had gone through because they decided to have a fun night out after a rock concert with some boys.

In Meenal (Taapsee Pannu), Falak (Kirti Kilhari) and Andrea (Andrea Tariang), I saw all our daughters, grappling with the befuddled notions of ‘What Men Can Do, What Women Can’t Do’ – and what happens when women do, what men say, women can’t do.

“Pink” is a very important film, and not only because it addresses gender issues with such caustic elan, biting away at patriarchal prejudices with such skill and efficiency that we don’t even realize how much of the indictment the narrative presents against patriarchal bullying.

It all comes out in a tumble in a rousing courtroom finale where the aging but still sharp lawyer Deepak Sehgal (Amitabh Bachchan) with a dying wife (Mamata Shankar) in the hospital, provokes the spoilt rich politician’s scion (Angad Bedi, sufficiently credible) to say why it is okay to force yourself on a certain type of “loose” women even if they say no to your advances.

But then here’s where the narrative plays out a greatest lesson without glee or glory: when a woman says no to sex, it is a no.

Period. So stop right there!

Just because that girl you’ve been staring at for much more than 14 seconds is wearing a short skirt and laughing loudly and drinking and cracking a dirty joke at a party where “nice” girls are not allowed, it doesn’t mean she can be forced to have sex with you.

“Pink” takes us beyond, far beyond, black and white, and away from the comfort zone, into an area of exposition on gender discrimination where it is hard to deify the victims and demonize the aggressors.

This is where this film scores much higher than other remarkable treatise on Sex & The Single Girl.

The three protagonists in “Pink” are no lip-biting, sympathy-seeking, urban cowgirls. They have their weaknesses, their blind spots. They like their fun. But must they pay for it?

They stand up to that one truth which the Big B’s legal rhetorics help us ingest: a girl can be any way she wants to be. She could have sex with as many partners as she likes. She still has full authority over her body. So the next time a guy thinks a woman is of “that sort”, he should think again.

“Pink” grabs our collective biases and age-old notions about permissible boundaries for feminine behaviour by the shoulder and shakes them hard.

This a film that can change gender equations in our society. The first-half creates an atmosphere of terror through little scenes that convey so much of the truth about gender inequality and sexual politics without sweating over the drama generated in cinema of this sort.

The background score is minimal and mellow, almost scoffing at our perception of high drama associated with cinema on male oppression. Aveek Mukhopadhyay’s camerawork is so majestically unobtrusive that it takes us into the heart of Delhi without getting emotionally drenched in the journey.

The narrative is constantly in a hurry to get on with the story. Yet there are poignant pauses in the plot.

This brings us to the performances. Each actor big or small brings vast credibility to his or her part. The neglected Kirti Kulhari comes into her own as Falak with a lot to conceal in her life.

Kulhari plays the character with such moral equity she leaves us no room to judge her blemishes. Her breakdown in the courtroom will shake every member of the audience, man, woman or child.

In contrast, Taapsee, who plays the main target of gender assault, sheds no tears. She conveys her character’s textured torment with an austerity of expression that is remarkable.

Andrea as the girl from Meghalaya who gets caught in the vortex of a murky scandal is the portrait of vulnerability.

But it is finally Bachchan who holds the key to this remarkable film’s incontestable power and efficacy. He is the voice of reason and the conscience of a morality tale where right and wrong are not easily identifiable. Yet when he sets forth reasons as to why a no from a woman means no, we are looking not at a rousing courtroom performance but a voice that ricochets through generations of patriarchal smugness.

“Pink” offers us no easy comforting solutions to the issue of women’s safety. Should a city girl feel safe with a guy who is well-dressed and from a well-to-do family? Is it okay to be friendly with a man a girl hardly knows?

“Pink” poses questions and leaves the answers hovering in the sphere of intangibility. It possesses an emotional velocity regarding the theme of violating a woman’s private space that we last saw in Tapan Sinha’s “Adalat O Ekti Meye”.

As we can see in “Pink”, things haven’t changed much over the years for women in this country.

Don’t miss this film, and don’t walk out during the end-titles or you will miss out on two vital experience. Of knowing what really happened “that night” and of hearing the Bachchan baritone recite Tanveer Qausi’s powerful poetry on feminine awakening.