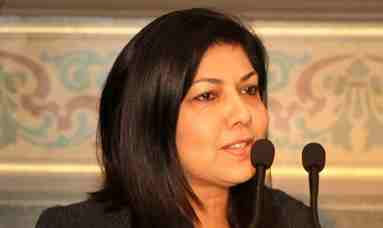 She established her own award-winning company, MultiConnexions among others and has extensive business relationships in Australia, India and internationally. She initiated the a business leaders meet during Indian Prime Minister Narendra Modi’s visit to Australia and also worked towards the AFR-AIBC National Conference ‘Engaging with India’.

As a leading cross-cultural expert, she is often consulted on governance issues arising through cross cultural differences in doing business.

Ms. Nandkeolyar and Mr. Varghese acknowledged the significant contributions of the former National Chair, Mr. Dipen Rughani during his four year tenure, particularly for his work with the recently concluded ‘Engaging with India Conference 2016’.

Commenting on her appointment, Ms. Sheba Nandkeolyar said: “I am excited and honoured to take on this new role as National Chair, and look forward to driving the delivery of many ambitious programs for the Australia India Business Council.

“With the Indian economy growing faster than any other major nation, at approximately 8 per cent, and with the upcoming Australia-India Comprehensive Economic Cooperation Agreement discussions, the time is ripe to forge newer business links and promote further investments between India and Australia.”

He has also completed a successful tenure as Chief Executive Officer of the SLC, and continues as an Executive Director of the SLC.

He brings a wealth of experience and a comprehensive and successful track record as a CEO and strategic leader in the public, not- for-profit and private sectors to his role as Vice Chair at the AIBC.

Mr Varghese said: “In the coming years, the Australia-India trade relationship will be central to the future of both nations in the broader Asia Pacific region and the global economy.

“I look forward to working with Ms. Sheba Nandkeolyar and the leadership team of the AIBC to bolster even closer economic, cultural and business ties between Australia and India.”

Outgoing National Chair, Mr. Dipen Rughani said: “Interest in India has started going up and the Australia India Business Council, as the peak body facilitating the bilateral business relationship, will continue to play an integral role.”

AIBC provides its members with a forum to provide input into the policy and agenda for both countries, exchange business ideas, and provide networking opportunities through interaction across government and business groups.