Skip to content
You are here
Home > International > Terrorist mows down 84 people in French Riviera, Nice 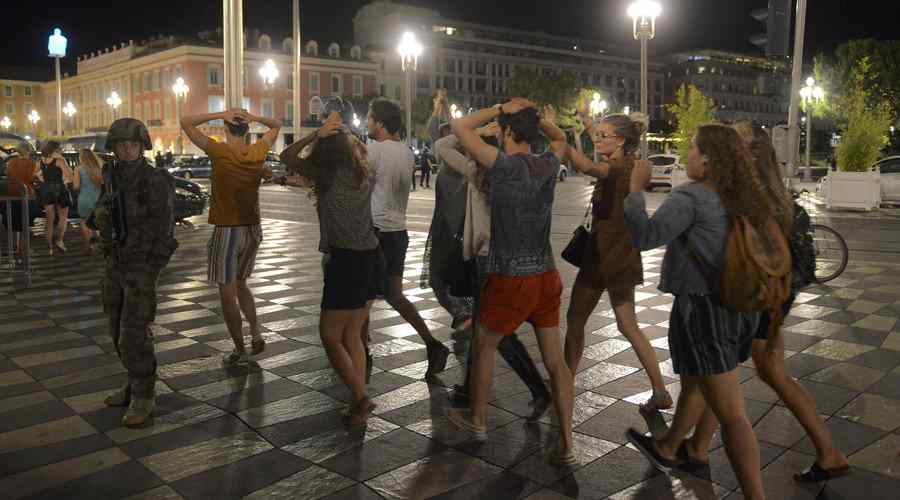 Nice, July 15: A terrorist ploughed with his truck through a crowd of thousands enjoying Bastille Day celebration in this French city mowing down at least 84 people, injuring some 150 — 18 critically, and numbing France.

In what President Francois Hollande said was an attack of a “terrorist character”, the heavy duty white truck drove into the crowd for two long kilometers an hour before midnight on Thursday, crushing unsuspecting people before police shot dead the 31 years old driver.

Both French citizens and tourists had massed along the pavement of the Boulevard des Anglais, the main street in Nice, to enjoy July 14 music event as well as fireworks when the disaster struck, French media reported.

Besides driving over people, the killer — believed to be French citizen of Tunisian origin who France24 channel said was known to police but not to intelligence agencies — fired at the crowd.

It was the worst terror attack in France since terrorists struck in Paris in November 2015, killing 130 people and injuring over 250 near a stadium.

Hollande extended the state of Emergency in France for three more months beyond July 26 and called in the reservists.

In the footage captured by terrified bystanders the sound of several gunshots being fired could be heard. Shocked witnesses said they watched the gory scene in disbelief and horror.

“We see this truck along the boardwalk, just ploughing through people, bodies getting hit and people running in all directions,” Tony Molina, who viewed it all from his apartment, told CNN.

He said following the crash, there was a barrage of gunfire. “There were families just lying down, crying next to these bodies.”

Paul Delane, an American, was with his partner at the Nice show. Both were walking when “all of a sudden thousands of people started running in one direction”. Paul and his friend also began to run.

“I had no idea what was going on. The music was so loud, we couldn’t hear anything. I didn’t see a truck, I just heard people running, screaming and crying and people carrying their children.”

Journalist Damien Allemand, however, saw the truck plough into the crowd and tossing bodies “like bowling pins along its path”.

Allemand was, like countless others, enjoying the fireworks when suddenly everything went wrong.

When he heard screams from a distance, Allemand — who works for digital service Nice-Matin — thought some fireworks may have gone out of control.

“A fraction of a second later, a huge white truck flew by at a crazy speed, driving over people, twisting the wheel to cut down the maximum number of people… I saw bodies fly like bowling pins along its path. Heard noises, screaming that I will never forget.”

In no time, there were bodies everywhere besides limbs and blood on the street.

The beach attendants were the first to reach the scene, bringing water for the wounded and towels to spread over the dead.

“France was struck on its National Day … the symbol of freedom,” Hollande said. “This is France, which is under the threat of Islamist terrorism.”

“An attack on the terrorist nature cannot be denied,” he was quoted as saying. “We must do everything so that we can fight against the scourge of terrorism.”

President Barack Obama said the US stood “in solidarity and partnership with France, our oldest ally”. The UN condemned what it termed a “barbaric and cowardly” terror attack.

India joined the international community to denounce the horror.

Indian President Pranab Mukherjee said he was shocked. Prime Minister Narendra Modi said: “India shares the pain and stands firmly with our French sisters and brothers in this hour of immense sadness.”

People cross the street with their hands on their heads as a French soldier secures the area along the Promenade des Anglais in Nice, France. © Jean-Pierre Amet / courtesy Reuters