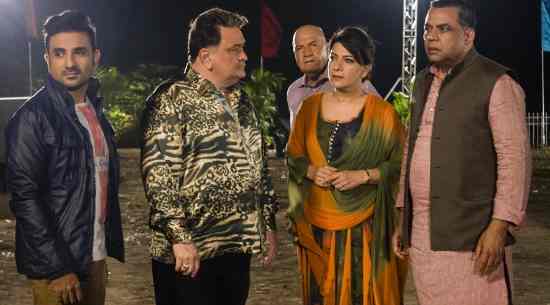 The Bollywood veterans who have cast their spell in acting and were featured in DAMINI (1993) are poised to become a family after 23 years.

Now before you guys go crazy in your imaginations, we would like to interrupt your wild dreams and say that it is the funny rom com PATEL KI PUNJABI SHAADI we are talking about.

The duo along with others recently wrapped up the shooting, of this gujarati-punjabi roller coaster ride.

Rishi Kapoor plays Vir Das’ father and will be seen at his comic best in the role of a staunch Punjabi while Paresh Rawal will tickle our funny bones by playing a strong Gujarati as the father of Payal Ghosh.

Loaded with quirky and funny encounters; Rishi and Paresh up the fun-quotient in this rom com, which is set to release in November this year.

Other than the primary cast mentioned above, PKPS also boasts of the veteran villain Prem Chopra along with Jinal Belani, Divya Seth, Bharati Achrekar and Tiku Talsania in pivotal roles.

PATEL KI PUNJABI SHAADI is directed by Sanjay Chhel and is produced by Bharat Patel under the banner of Bholenath Movies while the music is churned by Lalit Pandit and Uttank Vora.