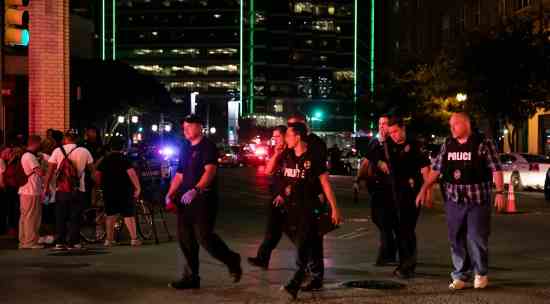 Minneapolis (US), July 8: The protests against encounter-style police killings of an African American in a suburb here and another in Louisiana spiraled into a terrorist attack that took the lives of five police officers in distant Dallas as a polarised nation prepared for conventions to nominate presidential candidates.

Dallas police chief David Brown announced Friday that a hate-fueled sniper who said that he wanted to kill white people, particularly police, was taken out using a robot to bomb him.

The man was a US Army veteran of the Afghan War, 25-year-old Micah Xavier Johnson.

The nation has been edge since the Dallas attack and as Brown was addressing the media in Dallas, the US Capitol, the seat of the Congress in Washington, was put under a lock down for a while.

The end to the Dallas attack came after the shooter, who was cornered in a parking garage, talked to a negotiator even as he exchanged fire with police for over 45 minutes, Brown said. Heightening the fears about Lone Wolf terrorists, he said the suspect told the negotiator that he was acting alone and did not have ties to any organisation.

Brown said that three others, including a woman, were in custody and officials were investigating the sniper’s possible links. Two of them were captured after a car chase.

Officials initially said that there were several snipers, but Brown said at his Friday news conference that it appeared there was only one.

The terrorist attack was unleashed on police as a multi-ethnic protest in Dallas against the police killings of African Americans – one of several demonstrations around the nation – was winding down on Thursday night.

The Dallas attacks followed the killings by police of an African American man in Baton Rouge, Louisiana on Tuesday and in the Minnesota suburb of Falcon Heights Wednesday night.

The aftermath of the Minnesota shooting was captured in a chilling video by the girlfriend of the victim, Philando Castile, sitting next to him in a car moments after he was shot with a police officer brandishing a gun as he was bleeding to death.

Going viral, it set off a wave of outrage across the nation. Castile, a school meals program supervisor, was shot after they were stopped for driving with a tail light that was not working.

Minnesota Governor Mark Dayton acknowledged that race may have had a role in the shooting. “I think all of us in Minnesota are forced to confront that this kind of racism exists,” he told reporters Tuesday.

On Tuesday a DVD seller, Alton Sterling,was shot by police in Baton Rouge in the southern state of Louisiana. The killing of 37-year-old Alton Sterling was captured on a cellphone by a bystander and on a car’s dashboard camera.

The Democratic Party’s national convention to officially nominate Hillary Clinton as the party’s candidate for the November presidential election is only nine days away and the subject of race has divided the public discourse. Clinton and Republican Party’s Donald Trump tweeted their condolences to the families of the police killed. The killing of African Americans by police and the terrorist attack on police have the potential to heighten the polarisation.

Public figures have been scrambling to defuse the fallouts, first from the killing of African Americans and now from the deadly attacks on police, said to be the worst on public safety personnel since 9/11 almost 15 years ago.

President Barack Obama, who was in Warsaw for a NATO summit, denounced the Dallas attack as “vicious, calculated, despicable” and said, “Let’s be clear: There is no possible justification.”

The Black Lives movement that has been spearheading the protests against police brutality distanced itself from the Dallas attacker, tweeting, “Black Lives Matter advocates dignity, justice and freedom. Not murder.”

“Killers, murderers, hijacked a peaceful protest and used it as a staging ground to kill and target police,” said William Barber, a leader of the National Association for the Advancement of Colored People, the premier African American civil rights organisation.

“These police were doing their jobs. They were watching over children and families.”

“We, as Americans, need to acknowledge and address the issue of racial disparity in our country,” Rajiv Pandit, a Hindu American Foundation board member living in Dallas, said.

“And what the past 70 years of history has shown us — from Mahatma Gandhi and Martin Luther King to Nelson Mandela — is that nonviolent movements are the best way to bring about the most needed justice and transformative changes in society.”

In a hairsplitting attempt to distinguish it from attacks by Islamic radicals, officials and the US have pointedly refrained from calling the Dallas mass shooting a terrorist incident, even though it had all the hallmarks of one.

Brown, himself an African American, called his police “some of the bravest people you want to be associated witha who “risk their lives to protect our democracy”.

CNN quoted official sources as saying that nothing in Johnson’s background gave any hint that he could carry out such an attack.

Only one of the five police officers has been identified. He had served in Iraq and Afghanistan training local police, media reports said.

A wounded police officer was a woman.