Do Australian women even care about the AFL?

With the prospect of a women’s football league in 2017, and a series of women’s exhibition matches scheduled for the current AFL season, it seems an opportune time to investigate not only how Australian women’s involvement in the AFL is tracking, but whether many women actually play Aussie Rules football themselves.

The results suggest there is room for improvement…

On a brighter note, there were modest increases in paid-up club membership among Aussie women (from 3.1% to 3.6%) during the same period, as well as in attendance of AFL matches (admittedly, an almost negligible growth from 9.8% to 10.0%).

But while the overall proportion of women who support an AFL team has declined, nine of the league’s 18 teams have actually seen their number of female supporters rise over the past few years.

Fremantle Dockers experienced the largest growth by far, gaining an additional 70,000 female supporters since 2012, which puts it in sixth position overall for number of female fans. 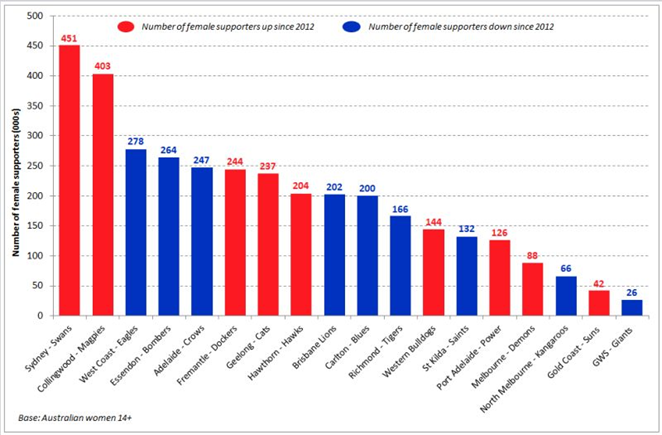 As the country’s most widely supported club, it is no surprise that Sydney Swans have the most female supporters (451,000) — and rising, with an additional 31,000 women joining their fan base since 2012.

Women’s participation not kicking many goals

Of course, supporting an AFL team is one thing, and playing Australian Rules is another entirely. Fewer women play Australian Rules than niche sports such as field hockey, archery, gymnastics, martial arts or ice/figure skating.

“Although the proportion of Aussie women who support an AFL team has slipped, this is consistent with the national trend rather than being gender-specific…”

Also noteworthy is that The Footy Show now has a woman panelist – Rebecca Maddern, after 13½ years at Seven.

Maddern’s appointment at Nine will always be referenced in history, in the chapters of Women and AFL.

Similar Posts by The Author:

Have issues with home builder?