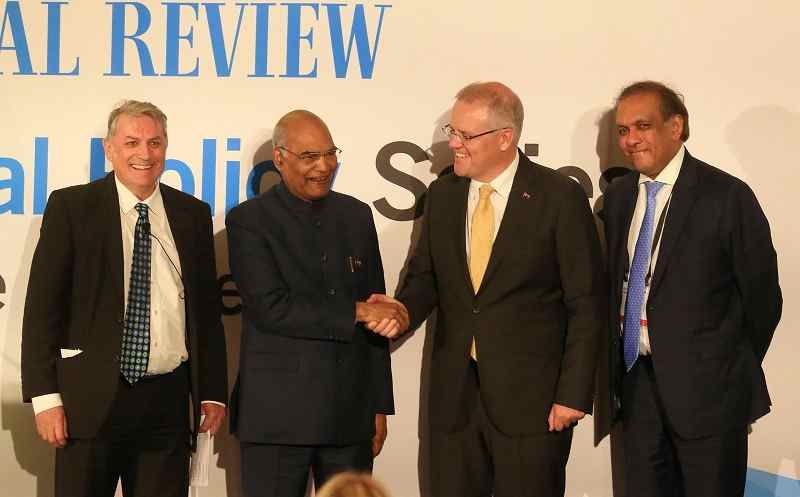 Delivering the annual AIBC national Australia India Address 2018 at a packed Shangri-La Hotel ballroom in Sydney on Thursday, the President said Australia and India shared many commonalities and had much to gain from each other’s progress.

“In recent years, we have stepped up our strategic partnership, deepening our engagement in defence, security, technology and people to people ties.

“There is matching energy and heightened policy focus on our trade and investment relations as well,” President Kovind said.

He welcomed the recent release of the ‘India Economic Strategy to 2035 – Navigating from Potential to Delivery’ and the Australian Government’s positive response to the report articulated by Prime Minister Scott Morrison on Thursday.

“I gather that Prime Minister Morrison has a taste for Indian food and in fact cooks a mean curry. I am sure he can help us come up with a recipe for even better Australia-India relations,” the President said, to the amusement of his audience.

Talking about the process globalisation, he said, it “is most meaningful when it helps the range of global stakeholders – from international corporations to local communities, whether in Australia or India.

“…In terms of openness to foreign capital and international investors, India is in the top league… business sector, from aviation to mining to defence production, has had doors thrown open to global players and investors”.

The President also dwelled on the much debated issue of ‘climate change and Adani coal mine in Australia’ – that India being the first major country seeking to make a leap into industrialisation while combating climate change and reducing the intensity of dependence on fossil fuels.

“India has set itself a target of 175 gigawatts of renewable energy by 2022, of which 100 gigawatts will comprise solar energy. We are on course to not just achieving that target but exceeding it”.

Up-talking the economic and social transformation in India through technology and innovation, the President said that “India’s traditional strength in IT is well-known” and that India’s digital economy and start-up culture is where Australian direct investment should focus.

He however, pointed to “a gap”.

He said “It’s not that Australian companies are not present in India – it’s just that there is still enormous room for us to work together.

“The Indian market offers Australian companies and investors a huge consumer base and the prospect of considerable returns”.

Also addressing the Summit, the Australian Prime Minister Scott Morrison referred to Gallipoli and the “contribution of Indian soldiers to the Gallipoli cause. They numbered 5,000 men and they served alongside our troops.

“Battalions of professional soldiers, including Sikh infantry units and mule drivers from Punjab… Later in the war, at least a dozen Indian soldiers actually served as ANZACs – as members of the Australian Infantry Force,” Mr Morrison added.

He referred to the memorial to the Indian soldiers who joined the AIF in Cherrybrook, Sydney. The memorial was officially opened earlier this month.

Mr Morrison also spoke about the transformation of India and that it was “already the fastest-growing large economy in the world”.

He pointed to the India Economic Strategy report by Peter Varghese, which he said “sets out a roadmap for the Australia-India economic relationship to 2035”.

He referred to four key sectors being the priority for Australia: education, resources, agri-business and tourism.

Adding to that will be Australia’s “support for the Australia-India Mining partnership at the Indian School of Mines in Dhanbad and establishing a Consulate-General at Kolkata.

“Now coal is our single biggest export to India — worth more than 9 billion dollars in 2017,” PM Morrison said.

Later Prime Minister Morrison and President Kovind together unveiled the Mahatma Gandhi statue at the Jubilee Park in Parramatta, Sydney.

Mr Kovind said “This initiative has a very special meaning. To help spread his legacy and timeless message across the world…”

President Ram Nath Kovind arrived in Sydney on Wednesday, as the first stop of his historic three-day state visit to Australia, the first ever by an Indian president.

He formally began his visit by paying respects at the ANZAC War Memorial in Sydney, before attending an Indian community reception hosted by Dr Ajay M Gondane, High Commissioner of India to Australia, on Wednesday.

As part of the President’s visit, five co-operation agreements were signed between India and Australia.

Later, he was accorded a ceremonial reception and hosted at a luncheon banquet by the Governor-General at the Admiralty House.

He will spend Friday in Melbourne before flying back to India on Saturday.