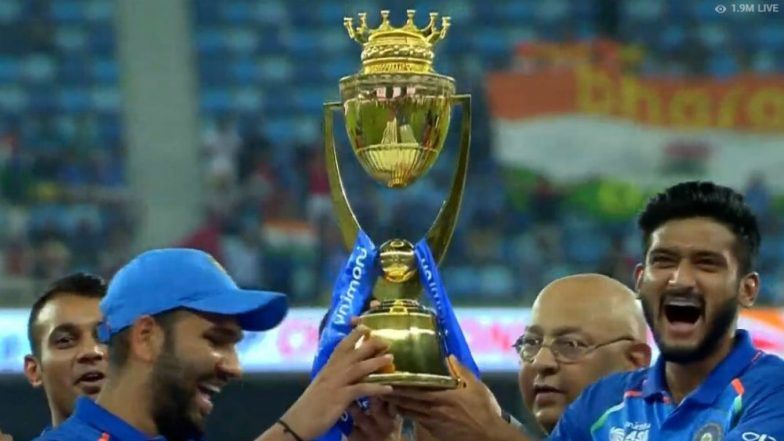 Dubai, September 28: India pulled a thrilling Asia Cup finals win here tonight with the nail-biting last ball thriller finish. It clinched the Asia Cup 2018, their 7th, beating Bangladesh by three wickets. With 6 runs needed from the last over, Kedar Jadhav and Kuldeep Yadav managed to not let their nerves get the better of them and guided India home. And they made all of Indian cricket fans proud in the process.

Bangladesh made a modest total of 222, setting India a target of 223. With the batting line up India has, it seemed not so insurmountable to start with. Skipper Rohit Sharma  provided India with a good start scoring 48 off 55 balls but with a couple of quick wickets (Shikhar Dhawan and Ambati Rayudu) falling, the match looked tilted in Bangladesh’s favour. Doing the hard work for Bangladesh, Nazmul Islam took the wicket of in-form opener Shikhar Dhawan while Ambati Rayudu was caught behind off the bowling of Mashrafe Mortaza.

The match then was left to the experience of Mahi (MS Dhoni) and Dinesh Karthik. They both chipped in steadying the innings with Dhoni delivering 36 off 67 balls and Karthik 37 off 61 balls. India looked well and truly in control with their 54-run partnership for the fourth wicket.

And then with a span of 30 balls, both batsmen lost their and the pressure was once again back on India.

Making the win a real team effort, Kedar Jadhav and Ravindra Jadeja took on the fight against Bangladesh who were delivering a very disciplined bowling attack. Indian fans got worried when Kedar left the field due to a hamstring injury. As if the nerve pendulum was not swinging wide enough, it put more pressure on the team and their fans. But fortunately for them and for India, a very resolute Kedar Jadhav came back to finish the match for India. Earlier, both Kuldeep Yadav and Kedar Jadhav were quite impressive with the ball as Bangladesh were bowled out for 222.

For Bangladesh, Rubel Hossain (2/26) and Mustafizur Rahman (2/38) did the most damage with the ball.

On batting, Liton Das and Mehidy Hasan handed Bangladesh a brilliant start with a 120-run partnership. But the star has to be Liton Das who scored his maiden ODI century off just 87 balls. But he kept running out of partners as they kept losing wickets at regular intervals and were ultimately bowled out in 48.3 overs. For Bangladesh, all went downhill after Mehidy’s dismissal.

Liton’s innings came to an end for 121 as MS Dhoni completed a brilliant stumping off Kuldeep Yadav’s bowling in the 41st over.

Soumya Sarkar contributed 33 runs with the bat – contributing crucial runs in the death overs but he lost his wicket when he was run out after a terrible mix-up.

For India, Kuldeep Yadav 3 wickets for 45 runs and Kedar Jadhav 2 wickets for 41 runs were the stand-outs. India’s fast bowlers Jasprit Bumrah and Yuzvendra Chahal claimed one wicket each. In the end it was sweet 7th Asia Cup for India!