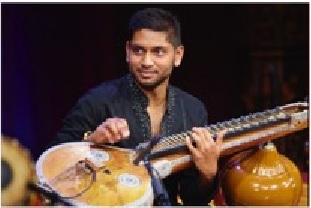 Hari Sivanesan, along with percussionist Thabo and Sujeevan, guide you on a journey through South Indian classical music, its nuances, versatility and evolution through veena and song.

They will take you from Chennai to Jaffna through the tea producing world of Carnatic music.

In the second set, Hari collaborates with dancer Priya Srinivasan to bring an exquisite visual accompaniment to music through story.

Hari will finish the concert with a segment from the work of the late greats, Ravi Shankar & George Harrison, with whom he worked and toured from his early teens.

Hari was born and raised in the West but with a heart rooted in the East. He trained under Smt Sivasakti Sivanesan from the age of 8 and was the first scholarship awardee of the Asian Music Circuit to train in Chennai.

Hari is one of the UK’s most acclaimed Veena Artists. He was chosen by BBC Radio 3 to play, present and produce a year-long series of radio programs presenting Carnatic music to UK radio listeners.

He took center-stage at the Royal Albert Hall for the first and only Carnatic BBC Prom in 2011.

Now working as a vocalist, composer, arranger and teacher, he believes that he is ‘just a student in the Ocean of Arts sharing what he feels inside.. whether for a wedding, sangeet, mehndi or puja.

Hari Sivanesan is truly a unique advocate for music and culture for a generation of artists born in the West.

He has recently moved to Melbourne.