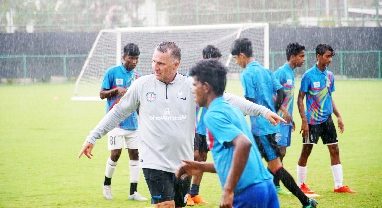 Riley McGree headlined the performance, scoring a brace in the rout of the Indian Super League side.

Warren Joyce’s entire compliment was tested in Kochi for the first match ahead of their first competitive match in the FFA Cup on Tuesday 7 August against Brisbane Roar.

As Melbourne City prepared for their upcoming match against the Kochi-based football team playing in India’s ISL – Kerala Blasters, they also took some time out of their gruelling training schedule to meet local children in two separate visits.

During its first two days of intense training ahead of its upcoming LaLiga World Tournament match against Kerala Blasters, City players and coaches were closely followed by local school children, for tips on how to be the next Bruno Fornaroli or Dean Bouzanis.

Instigator of the spontaneous training session, City Head Coach, Warren Joyce, said the support and welcome the squad has received while in India has been second to none and taking the local children for a session was an easy decision.

“We’ve all been blown away by the support we received from Kerala fans and to give the young players a run out today is part of our way of saying thank you,” said Joyce.

“For us to be able to share some of our knowledge with these kids will help improve and motivate them while giving them something to remember – maybe we’ll convert them to City fans along the way too!

The inspiring session was a surprise for the players who performed wonderfully.

The following day, Melbourne City players visited a local Kochi orphanage and played with kids for a couple of hours.

Bringing toys and games to encourage the children to keep playing football and be active, City players gave their best to give kids a day to remember.

Two days into the tour, City players faced a variety of weather conditions, with heavy rain followed by high humidity and intense heat, providing good early learnings in preparation for the upcoming LaLiga World Tournament and A-League season.
“We’ve put the team through a couple of different work outs over the past two days, pushing them to keep performing even when they’re fatigued,” said Joyce ahead of the face-off with Kerela Blasters, known locally as the Yellow Army.

“The conditions here in Kerala will be similar to those we will face at certain times this season and it’s important the lads know how to adapt to challenging weather and different environments.”

Melbourne City Football Club competes in the major Australian domestic competitions, the Hyundai A-League, the Westfield W-League and the Foxtel Y-League. Established in 2009, the club became known as Melbourne City FC in 2014.

It plays its home games at the 30,000 capacity AAMI Park stadium in Melbourne, where the Club celebrated its first ever silverware, the FFA Cup, in November 2016.