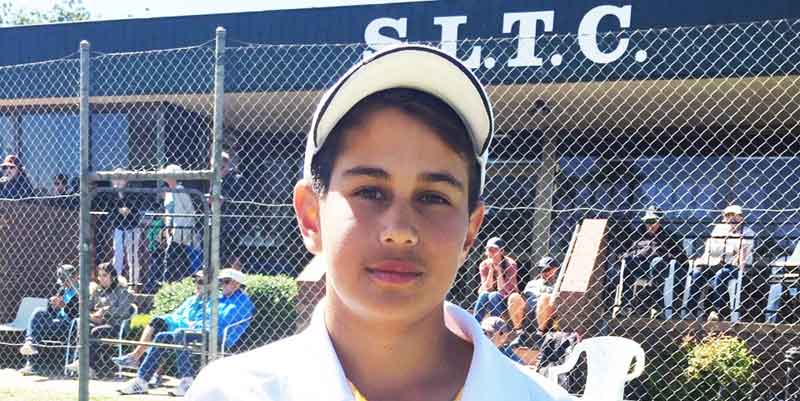 Melbourne, May 8: Perth born schoolboy Zachary Viiala – aka Zach is a 12-year old junior tennis player, who will represent Australia when he goes up against best players from 20 countries around the world.

Zach recently won his first 14/u state level tournament in 2018, making this journey from his first state level 10/u win, when only 8 years old.

He played “Super Tens” for WA at 9 years of age, winning his first state level 12/u when 10 years old and representing WA in the School Sports Bruce Cup team in 2016 and 2017.

He then went on to win the 12/u Clay Court National Title in 2017 and then Runner Up at the 2017 National December Showdown.

Surprisingly, Zach comes from a family with no tennis background, born to father Charlie Viiala of Finnish background and mother Sharan Dogra, of Indian descent, who migrated to Australia in 1992.

Speaking to Bharat Times, proud mother Sharan said that Zach’s sporting mettle could probably find way to his maternal grandfather, who was a competition-level Hockey Player in the UK. His maternal uncle played both County Hockey and Competitive Squash in the UK.

“Zach has loved sports from a very young age and was obsessed with both tennis and cricket before the age of 3,” Sharan told Bharat Times.

Reminiscing about Zach’s childhood, Sharan remembers Zach’s early love for tennis. He “hated daycare and would hide in the car at drop-off, except for the day they had “Terry’s tiny tennis tots” incursions.

“He was introduced to mini red ball tennis by a friend around the age of 4 years old, and that’s probably when he really fell in love with this sport”, mum Sharan said.

Zach’s parents engaged John Thorpe to coach him at Dalkeith Tennis Club when Zach was only 6 years old.

“John has coached Zach to his current ability. He has become a key part of Zach’s tennis family and understands Zach very well, allowing him to tailor his coaching to continually develop Zach.

“Charlie and I cannot speak highly enough of John as a coach and person… (and) others in Zach’s coaching circle… who have all contributed to his ongoing development”.

“Zach is very lucky to have such a great team to work with…” Sharan said.

For Zach, tennis is the be-all and end-all; spending countless hours watching tennis and idolising Roger Federer and dreaming “of being a professional player himself one day”.

“He is very quiet though and very grounded in reality, fully understanding that he has a lot more development to go and a lot more hard work” – never complaining about the hours, whether the early mornings or the off court training.

Zach’s mother Sharan describes him as “quite intrinsically driven to play and train, and this makes it easy for us to support his endeavour”.

Zach’s entry to this Longines tournament will be will be his first time travelling overseas to compete in an international competition. To be held at the foot of the Eiffel Tower during the first week of the French Open, the winners of the boys and girls tournament will each be awarded an annual grant to support their tennis career and development until their 16th birthday.

Zach is currently ranked number one in his age group and is looking forward to battling it out with the world’s best.

“I love playing tennis and playing in Paris at the Longines Future Tennis Aces tournament during the French Open will be the biggest event I will have participated in to date,” he said.

Alongside Zach, is Gold Coast schoolgirl Hana Sonton, who are preparing to fly to Paris as the Australian representatives in the boys and girls category for the 2018 Longines tournament to be held during Roland-Garros from 31 May to 2 June.

Longines has been the Official Partner and Official Timekeeper of the French Open since 2007.