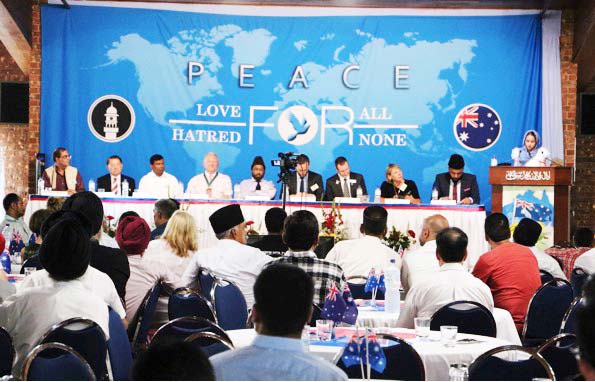 Over 350 people including 150 guests attended the event. National President and Grand Imam of the Ahmadiyya Muslim Community Australia, Imam Inam-ul Haq Kauser was the keynote speaker for the evening.

The reception began with singing of the Australian National Anthem led by a children’s choir, followed by a short speech delivered by 10 year old Satwat Wadood. The eloquent little girl told the audience why she celebrated Australia Day and what made Australia a great place to live in.

Various dignitaries spoke at the reception and spoke highly about the Ahmadiyya Muslim Community for its continued efforts in bringing people of various faiths and cultures together to celebrate this special occasion.

Among the dignitaries that were present included: Mr Chris Crewther, Federal Member for Dunkley, representing the Government of Australia. He delivered a message from the Prime Minister Honourable Malcolm Turnbull addressed to the Ahmadiyya Muslim Community.

He told the gathering that the Ahmadiyya Muslim Community celebrated Australia Day with special morning prayers in all the major cities including Melbourne and Sydney.
“We started our celebration in Sydney with morning prayer. This was the case all over Australia by the Ahmadiyya Muslim Community that we made special prayers for the sovereignty of Australia. We pray that may God keep this country safe and secure.

The Ahmadiyya Muslim Community is a peaceful, law abiding and nonviolent community, founded in 1889. The community categorically rejects terrorism in any form and is also the only Islamic organisation to endorse a separation of mosque and state.
Imam Kauser also told the audience how members of the Ahmadiyya Muslim Community are being persecuted back in their countries.

He said that Australia has welcomed Ahmadi Muslims with open arms and provided them with shelter and protection. Speaking about the gratitude Ahmadi Muslims feel towards Australia, Imam Kauser said:

“… Australia, you welcome us with open arms. You comforted us. You gave us protection. You supported us. You have done a lot for us. Our children have a brighter future than ever before. We have been given all human rights…

“You have changed our pain and suffering into peace and tranquility. Thanks to Australia and to Australians.

“You have bestowed upon us freedom of speech, freedom of religion, freedom of living… This is what we never had back in our countries or hardly we ever had… My dear friends, Australia is a great gift of God,” Imam Kauser said thankfully.

The reception ended with silent prayer led by Imam Inam-ul Haq Kauser followed by a delicious dinner served to all guests.

An exhibition showcasing various Islamic literature and copies of the Quran in various languages were on display. Guests collected free copies of various books and peace pamphlets.