He said he was not ashamed to say he worked for Adani or in the mining industry, addressing a mining conference at the Melbourne Convention Centre.

This followed when anti-mining protesters burst into the conference as Guruswamy spoke about Carmichael coal project “not going anywhere” and would be built. Work is underway on the rail, road, accommodation and airstrip for the project.

Halfway through his speech, three suited protesters burst through a curtain at the side of the auditorium and yelled “Adani has got to go”.

Responding, Mr Guruswamy said, “The children are playing again, I will just not react to that”.

About 150 protesters chanted “go home Adani” from outside the Melbourne venue, which was kept heavily guarded.

Mr Guruswamy who is Adani Group General Manager, Corporate Affairs and Business Development, told the conference that Adani would meet its Australian tax obligations. He also spoke about Adani’s land use agreements with four indigenous groups, and that Adani believed in investing in local communities.

Adani has been approved to build the Carmichael coal mine in Queensland’s Galilee basin, which Coral Reef campaigners believe will put the Great Barrier Reef at risk.

Acknowledging the Carmichael Mine opponents Mr Guruswamy said he said he was proud of the agreement with traditional owners and said at least 7.5 per cent of jobs would go to those communities. 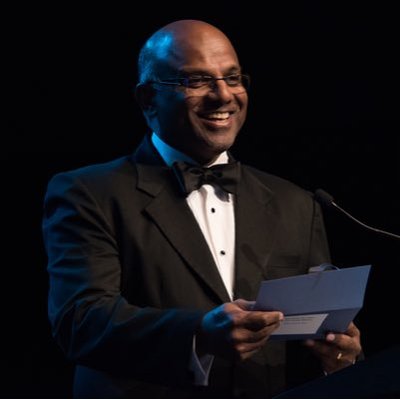 “I have worked with all the six different players in the Galilee, so I’m not going to be standing here and feel ashamed that I’m working for the mining industry or Adani for that matter”.

A key philosophy of Adani was “nation building,” and company strived to help meet food security and energy security, he said.

“We are a (registered) Australian company, which means all the taxes that are due to be paid will be paid within Australia,” he said.

Acknowledging that the company used offshore tax havens, he said that all taxes would be paid to the Australian government before any cash left the country.