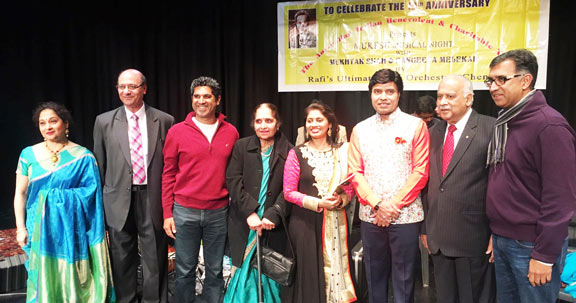 The Trust was formally launched by former Victorian premier Jeff Kennett in August 2010 Charitable Trust (AIBCT) with much fanfare at a function and gala dinner held at Green Acres Golf club in Kew.

It is common knowledge the Honorary Consulate in its last 18 months or so generated a profit of about $300,000 – $400,000. Talking exclusively to Bharat Times, Dr Rao explained the origin of those funds:

“Originally, I had to spend a lot of my own money to run the consulate. There was a time when I was spending about $12.60 per visa – while collecting only $10.00 – leaving me out of pocket about $2.60. I was protesting with the government of India to allow me to charge more – to cover my expenses and finally about 18 months before the government of India opening their Consular office in Melbourne, I got the permission to charge $15.00…:.

“Yes, that is about right…And then I requested that the Indian passports be handled by the Canberra office – which was accepted by the Indian government and I could reduce my office staff by 1 person… and thus in the last 18 or so months of my office as Honorary Consul General for India, the office amassed this amount of money…” told Dr Rao.

Dr Rao says it would not have been wrong for him to keep that money. “I sought legal advice which says…

“Did you get written legal advice?

“Yes, I received written legal advice, both from Australian and Indian lawyers” and was advised that the government of India or anyone else would not be able to lay any rightful claim to that money.

“Other Honorary Consuls in Melbourne – would regularly use this kind of money on their personal and lavish family holidays abroad”, Dr Rao told BT (citing examples of Honorary Consuls for some other Asian countries (India’s neighbors)) “but after discussions with my Vice Consul now Late Dr Martand Joshi, I decided to put the money for community’s use not to keep it as my own.”

Readers would remember the controversy about the legal ownership of this money erupting back in September 2006 when Shri Butshikan Singh, came to head the inaugural Consulate in Melbourne set up by the government of India followed by Ms Anita Nayar who took charge in June 2007 and remained in Melbourne May 2011. Ms Nayar went on record to say that she had advised the MEA (Ministry of External Affairs, India) of her understanding that the government of India could not lay any claim on that money.

According to Dr Rao, his decision not to keep the surplus money from the running of the Honorary Consulate for himself is the origin of AIBC Trust. Although this year marks the completion of 10 years of the Trust and according to Dr Rao – a lot of work has been done in the area of helping victims of domestic violence and needy international students from India, the activities of the Trust need structuring.

And perhaps to the detriment of the concept and Dr Rao’s vision, all other trustees have resigned and Dr Rao is the sole trustee of the Trust.

An astute politician, Jeff Kennett said at the launch, “While the objectives of AIBCT trust are honorable and good, there are too many of them.”

Kennett’s concern was that the capital may be expended before the trustees realize. To raise further funds to acquire properties to match the vision and further funds to finance the administration and running of it was advocated.

Although the aims and objective did not succinctly list for a ‘shelter for victims of domestic violence’, Dr Rao’s now vision to create such a shelter may have been circumstanced since Trust’s launch. Dr Rao, now fully retired, shuttles between Melbourne and Chennai for six months each. He is planning to go to India later in September to dispose of all his ancestral properties this time and settle here for good so that he can e with his children and grandchildren who are all here and also work on the project of ‘Shelter for Domestic Violence victims’. He believes the project requires about $1.5 million to take off and is ready “to use all of his business and political connections” to realize that dream vision.

Dr Rao and AIBC (Australia India Benevolent and Charitable) Trust need to charter a course of action to initiate a special journey back into the community’s consciousness to raise funds to the tune of $1.5 million.

On a side note, Dr Rao also told BT that many people from the community have asked him to come back to FIAV.

For those who may be interested – AIBCT’s fund raising effort – Mukhtar Shar and Sangeeta Melekar concert on 15 July in Kew did not yield the Trust any profits. According to Dr Rao, the effort rather ended up $13,000 in the negative.

Congratulating BT on completing twenty years, Dr Rao also wished Bharat Times and all associated with it all the very best:

“I am pleased to hear that Bharat Tines has completed 20 yrs … Bharat Times has been outstanding in bringing out factual community news and news from India… It’s reporting has been factual and accurate and I am sure that the community is appreciative of your efforts.

I wish Bharat Times all the Very Best in the years ahead.”