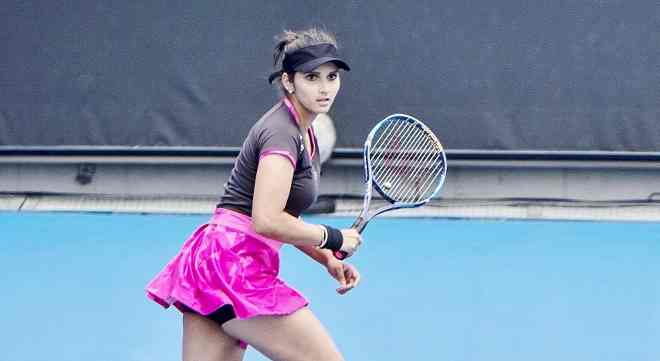 Sania-Dodig overcame a tough one-hour-18-minute battle in the semi-final against Aussies Samantha Stosur and Sam Groth 6-4, 2-6, (10-5) on Friday. Abigail-Cabal defeated Elina Svitolina of Ukraine and Aussie Chris Guiccione 7-6 (1), 6-2 in the last four stage.

It will be Sania’s second Australian Open mixed doubles final after winning in 2009 with compatriot Mahesh Bhupathi.

She has won three mixed doubles titles, the last being the 2014 US Open with Brazilian Bruno Soares.

The 30-year-old Hyderabadi has six major titles in her kitty, three in mixed doubles and three in women’s doubles.

Sania-Dodig won an epic quarter-final against Rohan Bopanna and Gabriela Debrowski, where they claimed a 12-10 win in the deciding breaker.

Later, the second seeded pair showed impressive composure to claim the semi-final too. They were given a run for their money by Samantha-Groth but eventually emerged stronger from the tie.

Sania committed two double faults at crucial phases of the contest. But she remained unfazed by the mistakes.

“I was serving ok, just those couple of double faults. But that’s how it is.

“Me and Ivan are a good team, we stay positive and fight. We support each other when the chips are down,” Sania said after the match on Friday.

“Our strength is our return. We just had to trust we will get a chance, and we did.”

Dodig said he was under pressure in the match as the going got tough. “To be honest, I feel a bit of pressure,” said Dodig.

Dodig said as he is yet to win a major title in mixed doubles he will try harder and will take cue from her partner who has greater experience in summit clashes.

Dodig says he doesn’t have as many Grand Slams as her so he will be trying his best in the final that they reached on Friday.

“We played the final in Paris and we lost a tough match and now we’re again in a final and now I don’t have so many Grand Slams like Sania but I have one in doubles, so I’m here trying to give my all and energy for at least one more mixed (doubles title),” he said.

Dodig, 32, added he is glad to strike up a decent partnership with Sania.

“I’ve really enjoyed playing with Sania. We had a good run last year here as well and now being in the final is great for us. Unfortunately, we always have to play these super tie-breaks, but it’s fun if you’re winning,” he said.

This is Sani-Dodig’s second Australian Open title and fourth major trophy together, having won in 2015. They didn’t pair up in the tournament last year.