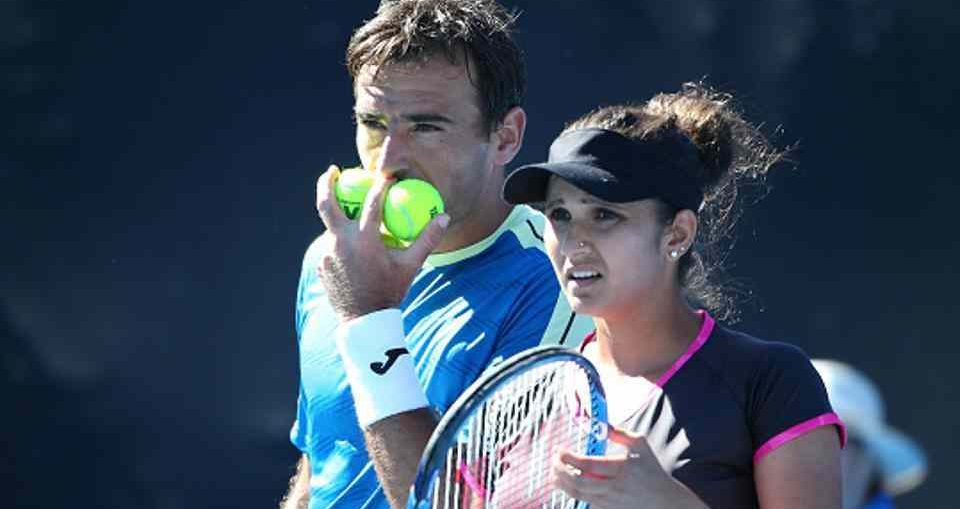 Melbourne, January 25: Indian tennis sensation Sania Mirza and her Croatian partner Ivan Dodig came from behind to edge past Indo-Canadian pair of Rohan Bopanna and Gabriela Dabrowski and reach the mixed doubles semi-finals of the Australian Open, here today.

The second seeded Indo-Croatian duo held their nerves to save two match points in their 6-4, 3-6, 12-10 win against the unseeded pair of Bopanna and Dabrowski, who wasted as many as four match point chances, in a match that lasted an hour and seven minutes on Show Court 3 here.

Sania-Dodig pulled off a tense win to seal a place in the mixed doubles semi-finals of the Australian Open while Bopanna and Gabriela were left to rue missed chances in the 67-minute match.

With this defeat, Bopanna’s campaign has ended at the first Grand Slam of the season. He had lost in the men’s doubles second round with new parter Pablo Cuevas.

Earlier Sania Mirza set up the face-off with Rohan Bopanna in the mixed doubles quarter-finals after she and Ivan Dodig defeated Alexander Peya and Zheng Saisai 2-6, 6-3, 10-6 on Tuesday.

The Indo-Croatian pair were outplayed in the opening set as Peya-Zheng began the proceedings aggressively. But second seeded Sania-Dodig used all their experience to turn the tide and broke their opponents at a crucial time in the second set to win it 7-5.

The quarter-final pitted the two Indians who represented the country in mixed doubles at the 2016 Olympics.

Sania and Ivan will take on either Indo-Swiss duo of Leander Paes and Martina Hingis or Australian pair of Samantha Stosur and Sam Groth for a place in the final.

Paes and Hingis will play their quarter final match against the Aussies on Thursday.

Sania had also lost in the women’s doubles pre-quarterfinals with Barbora Strycova but is still alive for her overall seventh and fourth mixed doubles Grand Slam title.