Skip to content
You are here
Home > Comment > OM Puri: An actor for all seasons with remarkable range of expressions 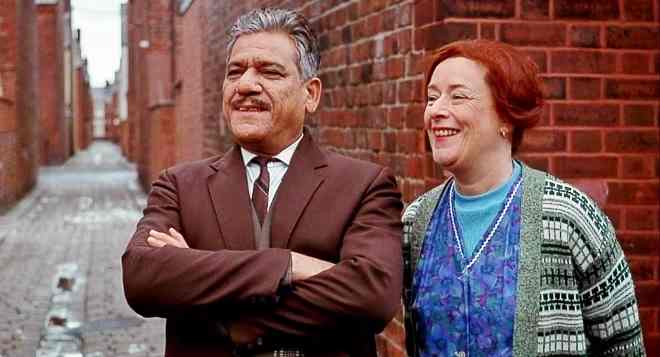 His craggy, pockmarked but distinctive face may have kept him from becoming a leading man in films, but Om Puri’s remarkable range of expressions made him immortal, writes Vikas Datta

Om Puri used a remarkable range of expressions he could convey from impotent rage to blazing menace to comic exasperation, along with his trademark baritone, to play some immortal roles on the big and small screen in India and abroad.

The true tribute to an actor is in remembering some of their his performances and for Om Puri, who succumbed to a sudden heart attack on Friday, there is no shortage of roles, big or small, heroic, comic or villainous, in masala or art films to recall his skill.

Will we remember him for his depiction of the victimised tribal of “Aakrosh” (1980), conveying his anguished helplessness by facial expressions till the very last shocking scene when he finally opens his mouth in a loud protest, the hapless policeman in “Ardh Satya” (1982), the enthusiastic poetry-lover in “In Custody/Muhafiz” (1993) or sinister terrorist Sanatan in “Maachis” (1996).

Or will we prefer to remember him in another light, as suspicious secretary Banwari Lal in “Chachi 420” (1998), the jovial and kind but dutiful Inspector Khan in “Pyar To Hona Hi Tha” (1997) or determined Inspector Udham Singh in “Gupt” (1997).

Then there is also his portrayal of British-Pakistani George Khan, who is loving but can be authoritarian and abusive towards his mixed family in “East Is East” (1999).

Any list of his most memorable performances is bound to be most subjective, but let’s try to list six of them, from a wide swathe of his work.

“Ardh Satya” – This was the movie that made his name, and fetched him the National Award for Best Actor. As Sub Inspector Anant Velankar, Om Puri well conveyed the helplessness of a low-ranking police inspector who soon realises the limits of his uniform’s power, the shameless manipulation of power by the elite and how justice is only a word.

“Jaane Bhi Do Yaaron” (1983) – As Ahuja, the dipsomaniac and corrupt Punjabi builder who wears sun-glasses round the clock, Om Puri held his own against a powerhouse of abundant talent in this cult classic. He also grabbed some of the best scenes — especially the one in which he comes across Satish Shah propped in his coffin, thinks his car has broken down and tries to help him. He also pops up as a sun-glass sporting Duryodhana in the epic climax scene and has one of the film’s most-remembered dialogues, when he storms out of a meeting with his rival (Pankaj Kapoor): “Tarneja, tena main dekh lunga, D’Mello, tu te gaya.”

“Tamas” (1987) – In this disturbing story of the circumstances in which India and Pakistan were born as independent nations, Om Puri plays low-caste labourer Nathu, who is cynically manipulated into an act which leads to riots and eventually his own death.

“Bharat Ek Khoj” (1988) – Om Puri was the mainstay of Shyam Bengal’s epic journey around Indian history, popping up in most episodes in key roles as Duryodhana, Angulimala, Ashoka, Allaudin Khilji, Krishna Deva Raya, a rebel soldier in 1857, J.C. Nigam, the District Magistrate of rebellious Ballia in 1942, and so on. But his best was as Aurangzeb, especially when he faces a resentful Shivaji (Nasseruddin Shah), who does not mellow despite all his attempts at conciliation and ultimately puts gets Emperor into a towering rage.

“Kakkaji Kahin” (1988) – Based on writer Manohar Shyam Joshi’s political satire, this TV comedy saw Om Puri in the eponymous role of a thick-skinned, typical cow-belt wheeling-dealing politician who can solve any problem brought before him. Apart from his trademark guffaw, he was remembered for his literal translation from Hindi to English (eg. “Heart putting Kaushalpur king” for “Hriday rakhi Kaushalpur raja”).

“Mr Yogi” (1989) – Om Puri was the mysterious “sutradhar”, who confuses NRI Y.I. Patel (Mohan Gokhale) in India to find a bride and having to meet a dozen prospects from all the zodiac signs. In the final episode, Patel turns the tables and the sutradhar must turn into “Superman” to locate him (but being an Indian super hero, suffers due to weak batteries which see him tangled in a tree as he tries to fly and finally limp to his destination).

And let us end with two cameos where he well marked his presence – Nahari, the unrepentant rioter in Richard Attenborough’s “Gandhi” (1982), and as Gen Zia ul-Haq in “Charlie Wilson’s War” (2007), which shows how the Americans began their slide into the Afghan quagmire.

(Vikas Datta is an Associate Editor at IANS)