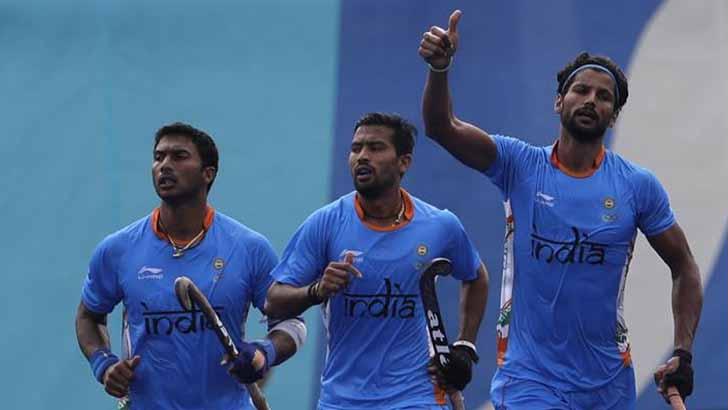 Playing with 10 men for large periods of the third quarter, India defended stoutly but were edged past by the home side in a pulsating match.

The visitors were the first to rock the board, Akashdeep Singh scoring in the sixth minute.

The home team settled into the game a bit as the period went on and scored in the 13th minute via Trent Mitton. That goal would take both teams into the first break level at 1 goal apiece.

In an action-packed second quarter, Captain V.R. Raghunath gave India the lead off a superbly executed penalty corner in the 22nd minute.

Australia equalised via a penalty corner converted by Jake Whetton in the very next minute. Both teams played attacking hockey and constantly shifted the momentum.

India had the final say when another Raghunath goal via a penalty corner gave them the lead as the teams went into half time.

In an ill-tempered third quarter that saw four yellow cards, three to Indian players; Australia wrested back the control, scoring an equaliser via a Jeremy Hayward penalty corner conversion in the 38th minute.

India were down by a player for long passages of play in the quarter and were even stuck with nine on the field for a while, with Nikkin Thimmaiah and Pardeep Mor both on yellow cards serving suspensions.

The teams went into the final break level at 3-3. Australia was the stronger team in the final period with Hayward scoring his second off a penalty corner to give them the lead, in the 54th minute.

India looked to make some inroads into the Australian defence and force an equaliser but the home side held on for a series levelling victory.

Australia came back from a goal down three times to beat India 4-3 in the second Test and level the two-match series 1-1 in Bendigo.

Earlier, Affan Yousuf’s brace had helped India win the first match of the series 3-2 on Tuesday.

The opening match of the two-game series in Melbourne, Affan Yousuf scored a brace to guide Indian men’s hockey team to the 3-2 win over world champions Australia.

Meanwhile, the women’s team lost 3-1 to Australia in the decider of the three-match Test series.

Captain Vandana Kataria opened the scoring for India in the 17th minute through a field goal. However, Australia fought back in the second half, scoring in the 39th, 41st and 58th minute to take the series 2-1.

India, ranked 12th, began the stronger of the two against fourth-placed Australia, in the opener.

Rani Rampal’s 21st minute strike from a penalty corner helped India beat Australia 1-0 in the first of the three-match Test series at the State Netball Hockey Centre in Melbourne, Wednesday.

But although Indian women had beaten the hosts in the opener, India lost the second match on Friday followed by loss in the third match, giving Australia 2-1 series win.

India beat Malaysia an emphatic 4-1 win to claim Bronze at Four Nations Hockey Tournament in Melbourne, Sunday. Akashdeep Singh gave India an early lead in the 2nd minute from a field goal. Skipper VR Raghunath doubled the lead in the 45th minute through a penalty corner.

Joel van Huizen pulled one back for Malaysia in the third quarter, but India regained control in the 52nd minute with Talwinder Singh’s field goal.

Rupinder Pal Singh scored his sixth goal of the tournament in the 58th minute to seal a comfortable win.

But earlier, Rupinder’s brace was not enough as New Zealand beat India to reach Four Nations final with three goals in the final quarter, beating India 3-2 on Saturday.

India only needed a draw to make it to the final against Australia, who had won all three group matches.