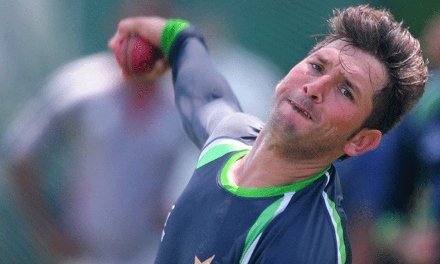 Lahore, June 19: Pakistan leg-spinner Yasir Shah on Sunday admitted he has been getting advice from legendary Australian tweaker Shane Warne ahead of the Pakistan cricket team’s tour of England.

The legendary Australian spinner Shane Warne worked with Yasir Shah in the nets, saying he gave the Pakistani slow bowler advice on tactics to help down England in this week’s third Test.

Warne enjoyed great success in English conditions during his playing days and Yasir is looking to tap into a little bit of his knowledge.

Warne enjoyed tormenting England during his illustrious career, taking 195 of his 708 wickets against England, 23 in his last series at home in 2006-07.

“I have watched his (Warne’s) videos and also had a chat with him on telephone because he has an excellent track record in English conditions,” Yasir was quoted as saying by cricket.com.au.

“I am getting some tips from the legend and learned some key things such as how he used to slow down his pace in England among other variations.”

Warne, who was in Sarjah on a promotional event; spent 90 minutes with the fast-rising Pakistan spinner who took eight wickets in the second Test against England in Dubai which Pakistan won by 178 runs on Monday.

In 2015, Warne had the chance of working with Yasir in Sharjah and he had praised the spinner then.

“He is probably the best leg-spinner in the world,” Warne, who has taken 708 wickets from 145 Tests, had said.

“The way the ball comes out of his hand, it is just absolutely fantastic. It is as good a leg-break that you can possibly see.”

Statistics also back up Warne’s claims, with Yasir currently averaging just 10.46 with the ball and ranked as the fourth best Test bowler in the world.

The former Australian great admitted he has been a fan of Shah, who made his mark at international level last year.

He took 12 wickets in Pakistan’s 2-0 series win over Australia in United Arab Emirates last year before taking 24 in the 2-1 win this year.

“Look I have always been a fan of Shah since the first time I saw him a while ago, probably he is the best leg-spinner in the world, the way he bowls and the way the ball comes out of his hand,” added the 46-year-old.

However, it might be tough for the 30-year-old Yasir to straightaway hit form as he coming off a three-month ban for failing a drug test. He too expects to face a tough challenge in England.

“There would be no better place to make a successful comeback to Test cricket than England and I am looking forward to the first Test at Lord’s,” he said.

“I am looking forward to bowling to the English batsmen in their own backyard. It will be a big challenge but I love challenges.”

The first Test between England and Pakistan will start on July 14.