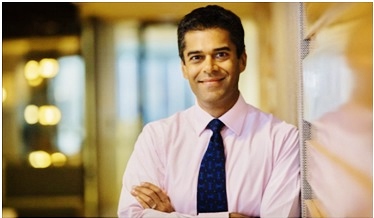 Melbourne, June 11: “May was a calm-ish month after the recent period of extreme volatility. This was not surprising given the confluence of risk events we have approaching over the coming weeks…” says BT Investment Management’s Sydney-based head of income and fixed interest, Vimal Gor.

That the Australian dollar could sink to record low of 40 US cents and interest rates slashed to less than 1 per cent, is a shock for the Australians, especially for travellers and importers, and ultimately pockets of all Australians.

The economist who prides himself as an eco-pessimist, Mr Gor predicts that weak economic conditions both in Australia and overseas will have the Australian dollar crash by a whopping 46 per cent, despite a growth 1.1% for the country, in the first quarter.

Mr Gor however, did not detail the timing of this collapse.

This forecast is in contrast to the earlier Deutsche Bank’s prediction of early 2014 – a “benign collapse” of the Australian dollar to US66¢ by the end of 2015.

Deutsche Bank’s chief economist for Australia Adam Boyton had said that the plunge would come about if the Reserve Bank kept interest rates on hold until 2016, amidst a scenario of the US lifting its rates and the US dollar continuing to strengthen.

Indeed the Reserve Bank of Australia has continued to lower and hold rates, currently at a low of 1.75 per cent, amidst the declining mining investment and reduced government spending. 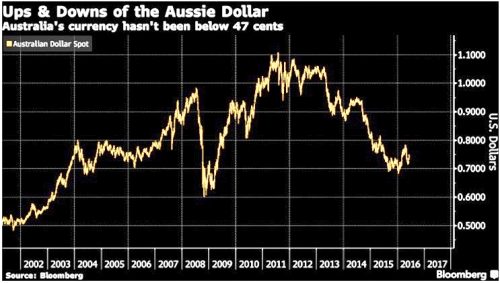 Currently trading at 74 US cents, the AUD will be 72 US cents by end 2016 and be in the rising spectrum, in the subsequent years, according to a Bloomberg forecast. This forecast was a median of a survey of various economic analysts.

It thus seems that this heavy collapse forecast for our currency by Mr Gor, may well be towards the unusually bold end of the radar for the Australian dollar and rates.

But Mr Gor is unyielding that an initial estimate of 50c / US dollar was achievable “but our recent analysis highlights that we have been too optimistic and that 40c is now our base case.

“Economists have forecasts for the AUD at 75c in 2018 (according to Bloomberg). This will have to be far lower if questions about funding become an issue, and we will be treated like an emerging market rather than part of the developed market club.

“An AUD at 40c would force much lower imports and higher exports and will start the necessary rebalancing.”

Claims of Mr Gor, who is a senior fund manager, will see an extraordinary march to very high prices on imported goods – including necessary food products, especially in the Indian and Chinese grocery market.

In fact, RBS senior currency strategist Greg Gibbs had said in 2014 that the bearish projection could be possible if China’s economy struggles.

Mr Gibbs believes that the Australian dollar had become a risk proxy for China.

“…in a negative scenario for China and much weaker commodity prices, and maybe a degree of financial stress in China, which has bigger global implications. Those are the kinds of things you need to get it down to those levels,” Mr Gibbs said talking of a 65 cents dip for AUD against the US dollar.

Talking on similar lines but on a more cynic note, Mr Gor, basing his forecast on current market trends he said, “A shock downside could easily see it move to 40 cents against the US dollar if current trends continue, commodities fall to lows again and economic growth deteriorates.

“The Australian dollar is at far more risk than most people think,” Mr Gor wrote.

Mr Boyton predicted a rise for the local currency due to a surge in the labour market.

“Our point instead is that a much lower Australian dollar should be considered a ‘base case’ and reflective of a ‘central forecast’; not some ‘tail risk’ event”, he had said.

Mr Gor however, pointed to the deficits in the budget, while the Reserve Bank lowered rates.

He said that “the move towards zero for the RBA will be the first for a country so reliant on foreign capital. Low rates in an economy like Australia will genuinely be a test of the stability of an economy that has a very specific relationship with the rest of the world.”