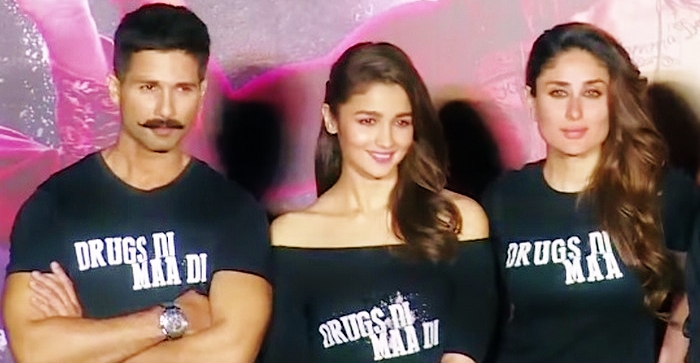 Mumbai, June 8: One of the producers of the film ‘Udta Punjab’, Anurag Kashyap has said they have appealed to the Film Certification Appellate Tribunal (FCAT), after a Bombay High Court order helped them receive the official letter from the CBFC informing them about the cuts. “Today (Wednesday) morning Pahlaj ji (Nihalani) came up with new allegations. The first thing he said was that on Monday his certificate was ready and that none of us went to pick it up.

“Yesterday (Tuesday), we sent them a legal letter to give us the official statement which his office signed and accepted. We don’t want such a man as our censor board chief. “We didn’t get it yesterday, today we went to the high court.

“After the first hearing, we got the letter of cuts. We immediately applied to the FCAT, whose presiding officer is now available till June 16.

We are going to request them to give us a window before that date. We’ll have to follow and see what happens,” Anurag said at a press conference organised by the Indian Film and Television Directors’ Association (IFTDA) in the presence of numerous directors. Earlier many film personalities expressed support for the “Udta Punjab” makers who are locked in a stand-off with the censor board over suggestion of 89 cuts in the movie.

He was talking at a press conference for his forthcoming film “TE3N” here, when the 73-year-old actor was asked to comment on the controversy over “Udta Punjab”.

“I know that there are rules and regulations… That’s something that the government has to decide. But as an artiste and a creative person, all I can say is that don’t kill creativity,” he said.

Bachchan said if filmmakers are “dissatisfied”, they can approach tribunal and the courts. He termed the delay as “unfortunate.”

Leading Bollywood filmmakers including Mahesh Bhatt and Karan Johar on Tuesday spoke out strongly against the censorship troubles that film “Udta Punjab” is facing.

Condemning how the Central Board of Film Certification (CBFC) has asked the makers to drop ‘Punjab’ from the film’s name besides effecting as many as 89 cuts in the movie, Karan tweeted: “‘Udta Punjab’ speaks of the reality of our times… Censoring reality amounts to delusion. The fraternity has to stand by what’s right.”

A filmmaker with a strong opinion, Mahesh Bhatt said: “Censorship is the child of fear and the father of ignorance. Is Pahlaj Nihalani listening?”

Filmmaker Hansal Mehta, known for hard-hitting films like “Shahid”, shared: “What is this I’m hearing about? Makes me very, very angry. Delusion or collusion? Why is the establishment so scared of films that mirror reality? Can the truth defame a state? ‘Udta Punjab’ censored.”

The demand by the censor board is reportedly under pressure from the ruling Akali Dal-BJP coalition in Punjab, where the extent of the substance abuse is placed by several surveys at over 70 per cent of the state’s 2.8 crore population.

Filmmaker Nikkhil Advani said: “I guess the next step will be to submit scripts for censorship. ‘Udta Punjab’ censored.”

Actress Soha Ali Khan commented: “Anyone who says that drugs are not a problem in Punjab, is either unaware, complicite or has mala fide intention.”

Screenwriter Niranjan Iyengar was rather direct in his comment when he said: “If we applied the same censorship rules to our politics, 95 percent of our politicians will have to shut shop! ‘Udta Punjab’ censored.”

Happy with the support of the tinsel town, Shahid tweeted: “Overwhelmed with all the support #UdtaPunjab #freedomofexpression #drugsdimaadi”.

‘Udta Punjab’ – a movie on the festering drug menace in Punjab, is slated to release on June 17. Anurag has ruled out delaying the release of the film.

Udta Punjab is directed by Abhishek Chaubey and co-produced by Phantom Films and Balaji Motion Pictures.