Melbourne, June 5: Upset Hindus have urged world’s largest online retailer Amazon.com for the immediate withdrawal of doormats carrying the images of various Hindu deities-temples-saint and sold on its website, calling it highly inappropriate.

Amazon.com found itself under frenzied social media attack, after it was discovered that the website had door mats with Hindu gods and goddesses on them for sale.

#BoycottAmazon soon started trending on social media with outraged people venting out on the company. 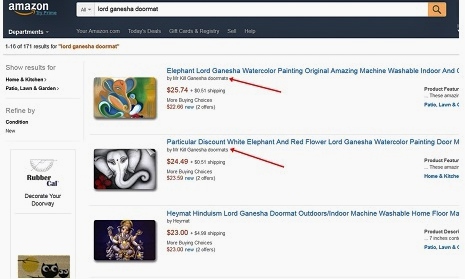 Hindu statesman Rajan Zed, in a statement in Nevada today, said that images of Hindu gods depicted on the doormats sold at Amazon.com website — Shiva, Vishnu, Krishna, Ganesha, Venkateswara, Saraswati, Murugan, Durga-Hanuman, Padmanabha — are highly revered in Hinduism and “are meant to be worshipped in temples or home shrines; and not for absorbing “water and dirt from shoes” or for sweeping on for cleaning or for drying wet feet and grabbing “dirt, dust and grime”.

He said it was shocking to visualize that Amazon.com, for its mercantile greed, was apparently persuading the world to scrub or wipe the soles of their shoes on the faces of gods which Hindus worshipped.

These doormats; some of which can be used as bath/floor mat or for “living room, kitchen, bathroom, bedroom, hallway, etc.”; and some “can be easily cleaned by sweeping”; are being sold on Amazon.com from $14.49 to $25.74.

Some of these clearly mention Lord Ganesh as God of Hindus and some carry the images of Hindu temples and worship place — Sun Temple Modhera, Akshardham Delhi, Angkor Wat, Bhuleshwar Temple, and others.

Rajan Zed urged Amazon.com and its President Jeffrey P. Bezos to offer a formal apology, besides withdrawing about 67 objectionable doormats.

“Trivialization of Hindu deities, temples and saint was disturbing to the Hindus world over.

“Hindus were for free artistic expression and speech as much as anybody else if not more. But faith was something sacred and attempts at trivializing it hurt the followers”, Zed added

While Amazon.com, Inc., headquartered in Seattle in Washington has claimed to have escalated the issue for redressal, the objects are still available for sale on Amazon.com.

#BoycottAmazon @noconversion @amazon @AmazonHelp Don’t play with Indian sentiment. it is not good for you.pic.twitter.com/nlwfTIsr55 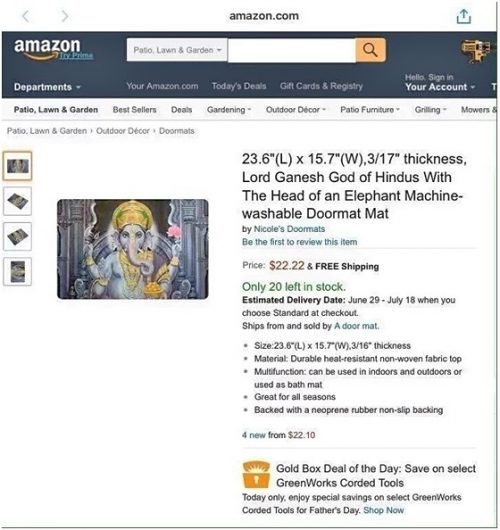 Why these foolish e-commerce sites play with our Hindu sentiments.#BoycottAmazon

This is not the first time that Amazon has gotten into trouble over Hindu sentiments. In 2014 the website was selling women’s leggings carrying images of various Hindu Gods, including a Barbie-fied version of Kali.

Amazon never responded to the incident.

Inappropriate usage of Hindu deities or concepts for commercial or other agenda was not okay as it hurt the devotees, Zed, who is President of Universal Society of Hinduism, noted.

Hinduism is the oldest and third largest religion of the world with about one billion adherents and a rich philosophical thought.