Skip to content
You are here
Home > Entertainment > Melbourne returned, All India Bakchod’s Bhat roasted in India over Lata-Sachin video 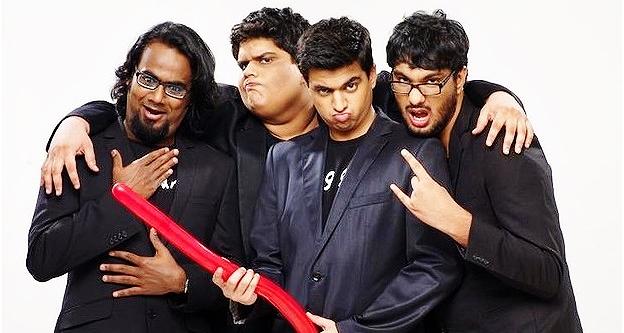 Mumbai, May 30: Just back from Melbourne, having performed locally on May 6, All India Bakchod (or AIB) members Tanmay Bhat, Gursimran Khamba, Rohan Joshi and Ashish Shakya, have landed into a spit-roast, literally in India.

The video, which liberally ridiculed and ‘roasted’ Lata and Sachin, went viral on the social media and other channels and triggered widespread outrage.

Among other things, in the video, Bhat has shown a face-swap. Statements like ‘why the 86-year-old Lata was still alive’ and ‘who was the better player between the 43-year-old Sachin and Virat Kohli’ raised a howl of protests and condemnations.

While posting the video, Bhat posted on Facebook: “I make such nonsense on my Snapchat – follow me there – ID: Thetanmay (Also I obvously love Lata and Sachin, just having some fun).”

The all-round condemnation for the past two days culminated in the MNS lodging police complaints against Bhat for the “highly objectionable content” of the video, first released on May 26.

Maharashtra Navirman Sena vice president Shalini Thackeray virtually laid siege to the cyber cell branch of Mumbai Police and vowed not to move out till Bhat was arrested for his latest video titled ‘Sachin vs Lata Civil War’.

Her party colleague and MNS Chitrapat Sena chief Amey Khopkar threatened to “beat” up Bhat wherever he was seen and stop his shows in the state.

Former Congress legislator Krishna Hegde demanded a law to bar defamation of national icons like Father of the Nation, Bharat Ratna awardees and others.

Ruling coalition partners Bharatiya Janata Party and Shiv Sena also sought the deletion of the offensive video from all online media and severest action against its creators.

Mumbai Police said it had already contacted Google, Facebook, YouTube, SnapChat and other channels for the deletion of the video online.

Bhat was at the receiving end of celebrities on social media networks too, with prominent personalities lambasting him for his “crass humour”.

Anupam Kher said: “I am 9 times winner of Best Comic Actor. Have a great sense of humour. This is NOT humour.”

“Absolutely shocked. Disrespect is not cool and neither is it funny,” said Riteish Deshmukh.

Celina Jaitley said she was “absolutely… Shocked and appalled. Not amused. Lata Mangeshkarji needs to be apologised to… NOW.”

He said: “When you guys write about me tomorrow, can you please use my snapchat ID – it’s thetanmay thanks.”

The AIB group staged India’s first celebrity roast in 2015; their YouTube channel now boasting one and a half million subscribers.

While in Melbourne, AIB offered some of the most fascinating acts at the recently concluded, Melbourne International Comedy Festival. AIB was a collective of the country’s most popular performing at The Forum.