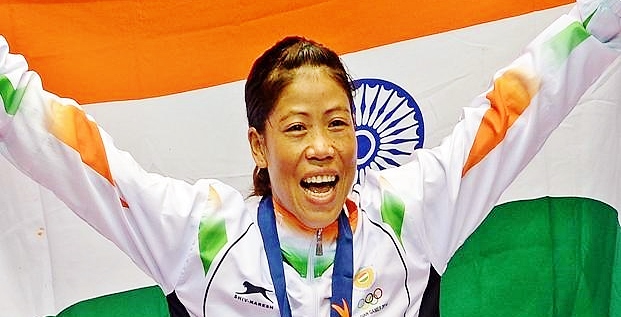 Astana, May 21 Indian boxing icon M.C. Mary Kom’s dreams of representing India in what would have been her second and final Olympics in Rio were shattered after she faltered in the World Boxing Championships’ second round here on Saturday.

The 33-year-old five-time world champion, had earlier said that she will quit the sport post the 2016 Olympics.

World Championships are the final qualifying competition for the Rio Games to be held from August 5-21. Only three weight categories of 51 kg, 60 kg and 75 kg are part of the women’s boxing competitions at the Olympics. An entry into the semi-finals not only assures the boxer of a medal but also a berth for the Olympics.

During the bout, 2014 Asian Games champion Mary started off positively but Azize played a tactical bout of strong defence and made the most of limited opportunities.

The veteran Indian attacked Azize but Azize was able to keep her at a distance and didn’t allow herself to be in a position to concede too many. The young German managed to be successful in her tactics despite a fiesty Mary upping the ante in the final moments.

With the loss, the hopes of Mary, mother of three from Manipur, to qualify for the Games fizzled out.

However, two more Indian pugilists — L. Sarita Devi (60 kg) and Pooja Rani (75 kg) — are still in contention in the World Championships and will be eying berths at the Olympics. Both of them have made it to the second round.

Mary Kom’s life was projected in a 2014 Indian biographical sports film directed by Omung Kumar and produced by Sanjay Leela Bhansali. The film starred Priyanka Chopra in the lead role of the eponymous boxer, with Darshan Kumar and Sunil Thapa in supporting roles as her husband and mentor, respectively.

The film depicted Kom’s journey of becoming a boxer to her victory at the 2008 World Boxing Championships in Ningbo.