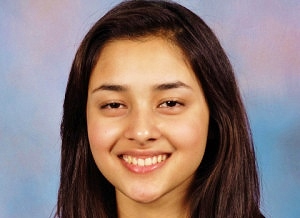 Melbourne, May 12: Sixteen year old Mount Waverley student Neha Salahuddin was presented with the Sir John Monash Award for Outstanding Leadership at a glittering event at the Monash Gallery of Art last night.

Despite her youth, Neha has an impressive record of community service. Neha has fundraised for cystic fibrosis, was a finalist in the Rotary 4-Way public speaking contest and has advocated to improve indigenous health and education.

“Neha and her fellow nominees show just how strong and enduring the sense of community spirit is in Monash,” Cr Lake said.

“You often hear today that technology, globalism and the pace of life are leading to a decline in community spirit, but that’s certainly not the case in Monash.

“We have so many people who go out of their way to help others, whether it is to check on the welfare of their neighbour or to deliver meals on wheels or to coach their kid’s football team or any number of other volunteer activities.

“It’s a privilege to have been able to thank 40 of these community contributors in this year’s awards.”

The winner of the Sir John Monash Award for Outstanding Leadership, Neha Salahuddin, was chosen from among category winners and each winner will be profiled in the Monash Bulletin newsletter about their special contributions.

In the Rotary 4-Way public speaking contest in 2015, Neha Salahuddin competed in the Grand Final as one of the six finalists.

A year 10 student of Mount Waverley Secondary College and a student leader at her school, Neha was chosen as one of the “Runners Up” for speaking on ‘Closing the Gap between indigenous and non-indigenous Australians’.